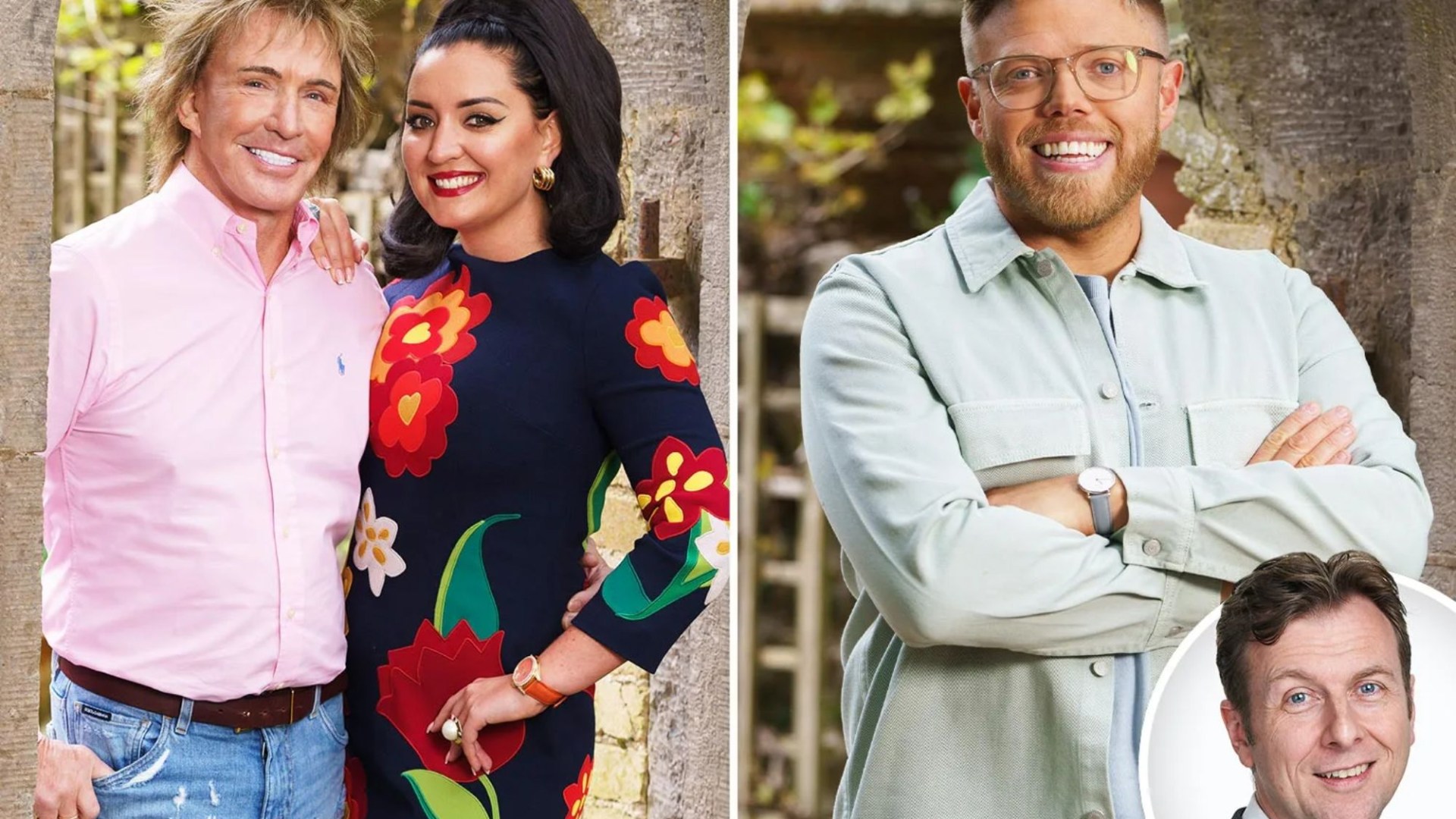 UNLESS I was dreaming, last night Falklands veteran Simon Weston and his wife Lucy were filming the Bee Gees’ How Deep Is Your Love under a bungee jigging crane.

More than 140 feet above them, Denise Welch and her husband Lincoln Townley were singing, between the last words of encouragement.

Then, with a final “3-2-1,” they leaped into the void, where they bumped and squirmed for a deadly minute, until Denise plaintively asked, “How can anyone he think it’s fun?

The question hanging over BBC1’s Unbreakable, a show that, if you can imagine such a thing should exist, is a six-part version of All Star Mr & Mrs.

That’s not how they sell it to us, of course.

According to host Rob Beckett, who is chaperoned by relationship expert Maria McErlane and psychologist Anjula Mutanda, just in case the fun breaks out: “This is the show that puts celebrity relationships under the microscope, through a series of challenges.

You get the point. They didn’t see many people. And you can understand the reluctance, given that if they really wanted to see who has the stronger relationship, they’d just check the biogs, where they’d find Simon and Lucy have been together for 32 years, Charlie and his other half got together. met eight months ago.

But that would be too logical and easy, so instead BBC1 devised a series of weird, Taskmaster-lite challenges, then pampered them by saying the bungee jumping bonus points would go to Stephen and his partner Rich , who was too scared to jump but still deserved them: “Like they didn’t give in to peer group pressure.”

If that wasn’t enough to kill the fun, someone also made sure these challenges run at the frigid pace of two per hour, which means there’s so much downtime that a bird will s **t on Lincoln Townley’s head during the first episode and they left him in the final cut.

In terms of well-targeted reviews, it’s as good as it gets.

If you want to know why it was such perfectly judged shit, you have to force yourself to watch celebrities declaring undying love to their partner over tinkling piano accompaniment, or spilling their guts at Anjula about poverty, homophobia, mental illness, ADHD, and a host of other important issues that, contrary to popular television belief, are diluted, not reinforced, by their incessant repetition.

Just to grind viewers’ gears a bit more, these confessionals don’t take place inside a sprawling country mansion. Oh no no no.

It’s what Anjula and all the other snoopers in Britain call ‘a safe space’. As you can probably imagine, it is difficult to shine in such clinical circumstances.

The one surprising thing about Unbreakable is that it seems to have unearthed a real reality TV star in the abnormally taut features of 69-year-old Charlie Mullins, who prides himself in his own description, “the most famous plumber of the world”.

Charlie is a little too eager to let us know that his own plumbing is also still in working order and that the “lucky” beneficiary is RaRa, his 32-year-old “recording artist” girlfriend, who has given us all a song in episode one.

Man, the noise. If you heard moans like this coming from any of your retaining walls, you would call Charlie to tighten the pipe supports.

In the blink of an eye though, I’d probably have them both on the next plane to the Australian jungle, or any other famous format more impressive than Unbreakable, a series that confirms two depressing truths about television.

The first is the reason television brings back so many old ideas, like Big Brother, Gladiators, The Big Breakfast, is that its news is mostly garbage.

The second is that the BBC is now so deeply compromised and poisoned by the revival cult that it is institutionally incapable of having fun, or even anything approaching the idea.

We all deserve better, just like Charlie Mullins. But in the meantime, Unbreakable’s format requires the world’s most famous plumber to give instructions to his blindfolded girlfriend RaRa through a megaphone, as she tries to find a flag inside the “labyrinth of love”.

Unless I dreamed about it too.

Unexpected goons in the bagging area

Ben Shephard: “A competition where only two teams have a chance of winning is called a two-horse competition…?

Ben Shephard: “Often kept as a pet, the Tosa Inu is a large breed of what animal?”

ITV’s Masked Dancer reaches the end of its useful existence with the revelation Candlestick is: “Bake Off star.” . . Liam Charles”. (WHO?)

Married at first sight, Thomas Smallpox earned the very rare distinction of being too toxic for reality TV.

And the equally shrewd Alastair Campbell berating C4’s Make Me Prime Minister contestants, at the end of their crisis management task, for being “sarcastic and devious” and “landing a missile in another country”. Because that’s Alastair’s job.

On Saturday night’s Strictly Come Dancing show, BBC1’s woke cult collided head-on with the show’s viewers and the resulting thump could be heard across Britain.

The eventual victims were the horribly mismatched couple of Richie Anderson and Giovanni Pernice, who would have been much better suited as one of the women and were clearly not too clueless about being eliminated.

And why would it be?

The show, after all, spent the first decade and a half of its life reminding us that “dance is the vertical expression of a horizontal desire”, before deciding that it was in fact about “diversity”. , “inclusion” and all sorts of other problems. already covered by a thousand different BBC shows.

Luckily for non-voters, Strictly viewers are far more honest than all those precious souls who claimed they were “shocked” by the decision and they hate political manipulation almost as much as they love honest effort and comedy. from Tony. Adams, whose third-round samba managed to be technically useless and artistically brilliant at exactly the same time.

If you’ve seen it from the start, you’ll know it was a Full Monty tribute for movie week.

If you caught up with him halfway through his striptease, you probably thought Abel Ferrara had recast Top Cat’s Officer Dibble as Harvey Keitel’s Bad Lieutenant.

But it was, as Anton du Beke suggested, the essence of Strictly, although a bewildered Tony later admitted: “I went from kind of ‘What’s it happens ?’ then, the second week, like ‘How can I get out of this?’

Me and my rules

A SUBJECT now that demands empathy, understanding, a nuanced response and an overwhelming sense of humanity from ALL of us.

lookalike of the week

THIS week’s winner is Liz Truss and the crazy, screaming woman who does the interrogations on Celebrity SAS: Who Dares Wins.

Sent by Gareth R via email.

DION DUBLIN: “Haaland went one-on-one with two players either side of him.”

Clinton Morrison: “Gerrard threw his hands in his head.”

Tim Sherwood: ‘The manager is staying whether he is or not.’

THE Abbott and Costello charm of Paul Whitehouse’s relationship with Bob Mortimer on BBC2’s Gone Fishing.

The exceptional performance of Ebon Moss-Bachrach as Richie in The Bear (Disney+).

And Bill Maher’s brilliant Unified Theory Of Wokeness, in real time, which points out: “Throughout history, slavery has been the rule, not the exception.

Do yourself a favor and watch it on YouTube.

Delusions of the month

BIG TV lies and delusions of the month. Married at First Sight: “Hi MAFS fans, Kwame here. Do you miss me? Of course you do.”

Celebrity SAS: Who Dares Wins, Ferne McCann, left: ‘People see me as a reality TV star and it bothers me when they say I have no talent.

Then you try to say “The Talented Ferne McCann” with a straight face.

tv quiz. What Frozen Planet II narrator Sir David Attenborough was talking about on Sunday night when he said: “They have been in a state of suspended animation since last autumn. Their heart has stopped beating, only their brain remains active, and then very, very weakly”?

A) The painted turtle.
B) The Lapland bumblebee.
C) The 1922 Committee of the Conservative Party.

BIG TV mysteries: Why didn’t Injury Lawyers 4 U move its headquarters to Walford?

Where is the secret army of Naga Munchetty fans hiding?

How come Married At First Sight attendees are always ironing?

And, more specifically, how many senior BBC executives and producers have been sacked for destroying A Question Of Sport?
My guess is none.