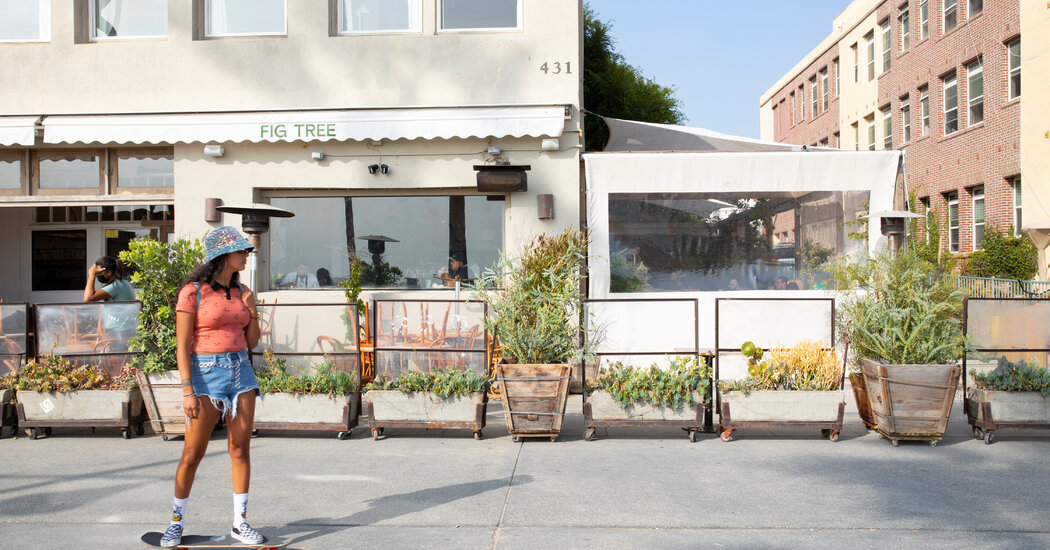 Best things to do in Los Angeles

In a city adept at producing disaster movies for entertainment, few scenes were as dystopian as the reality of Los Angeles during the lockdown. A little over a year ago, you could zigzag by bike from the sea to the city center on the main avenues of the city emptied of cars and pedestrians. Even the beaches themselves were voids patrolled by police cars with masked officers.

What a difference a year makes. Los Angeles has awakened from its pandemic slumber with an aggressiveness that begs to make up for lost time. With 62% of its residents over 16 fully vaccinated, Los Angeles County is above the national average, but a spike in Covid, including cases caused by the Delta variant, has resulted in hospitalization of hundreds of unvaccinated patients. Los Angeles County recently issued an indoor masking order.

Not everyone, including the Los Angeles Police Department, enforces this ordinance, but assume it is essential to bring a mask for all domestic excursions, including public transportation. Also note that many businesses, especially restaurants, have social distancing rules.

The party has not stopped, masked or not, the Angelenos are coming out en masse. The once empty boulevards are now teeming with summer traffic, new businesses and public festivals. Organizers are even relaunching the popular CicLAvia Sundays – the first is August 15 – where city streets are closed so bikes and pedestrians can take over with food stalls, live music and other performances. along the route.

The beach-city corridor of Venice, Culver City and Downtown is a promising area for discovering a revitalized Los Angeles. The Expo line, the tram that opened in 2012 (the light blue line on the metro map), passes through most of these areas and is a great way to bypass traffic. Here are some suggestions for making the most of your visit, with an emphasis on the outdoors.

Until recently, generations of diners on the Venice promenade had to make do with burgers, pizza and beach joints. The advantage of this informal atmosphere is that most restaurants have many restaurants outside, whether or not there is a pandemic. But culinary sophistication has arrived with the redesign of one of these restaurants’ most iconic, the Fig Tree, by brothers Matias and Sophia Moreno-Bunge and chef Dashiell Nathanson, formerly of the excellent AOC wine bar in Los Angeles.

Inspired by several favorite South American restaurants, the globe-trotting trio stripped the place to its minimalist core, planted a jungle of flowers, and concocted a menu with strong Mediterranean and Latin roots. The offerings are fresh, locally sourced and, unique to the promenade, stylish. Diplomacy is easy when you split plates of tangy beet salad or squid ink pappardelle, but for desserts like crispy churros with chocolate sauce: war! Meanwhile, patio tables offer front seats to the Theater of Humanity walking, rolling and dancing along the promenade. Dinner for two with drinks costs approximately $ 115. On weekend evenings, look for the music for the inevitable salsa and samba sessions in the surrounding parking lots or the big drumming circles on the beach.

For a more relaxed coastal scene, head to Mother’s Beach, a wide strip of sand on the protected waters of Marina del Rey. The marina is lined with modern condos, parks, and cafes, including the Beachside Restaurant and Bar, which has just expanded its outdoor perch at the dock to feast on grilled branzino or octopus with peanut salsa and more. fresh seafood. Brunch for two costs around $ 70. Recently lifted beach restrictions mean you can now rent paddleboards and kayaks and drift in the zen calm of the marina and even do sun salutations (stand-alone or in a guided group paddleboard yoga is the norm. here), with the seals and the sea barking the lions settled on the moored boats.

For four decades, diet food connoisseurs of West Los Angeles have flocked to what was once a small natural food market. Now covering a block selling some 50,000 items, many of which are store produce, Rainbow Acres Natural Foods has become during the pandemic a sanctuary for those seeking healthy supplements and meals. The store offers contactless shopping and door-to-door delivery, but it’s more fun to delve into the daily menu offerings like free range chicken in soy sauce, organic sunflower oil, garlic and rosemary. , or the cabbage stir-fry with ginger tofu, combined with a seemingly endless array of cold-pressed juices and smoothies. The dining tables outside the market are on a busy street, so do what the locals do and have a picnic at nearby Marina del Rey or Venice Beach.

Over the past two decades, this once-sleepy indoor residential community surrounding the anonymous white walls of the massive Sony Pictures Studios lot has been rebuilt into one of California’s most vibrant, bohemian, and creative neighborhoods.

Just a block south of the Culver City subway station, Platform is an intimate mall with cafes and shops centered around a leafy courtyard. Left for dead during the pandemic, Platform is enjoying a renaissance with chic Los Angeles residents flocking to boutiques like Janessa Leoné’s hat and handbag store (she was the one who made the signature hat on the cover of Taylor Swift’s “Red” album) or to nibble on grilled mesquite-tacos in the brutalist setting of Loqui.

The Stan Surf Couturier pop-up store is perhaps Platform’s most spectacular new arrival. Founded by emerging young designer Tristan Detwiler, Stan’s post-surf clothing (Los Angeles for loose fit), made from vintage textiles, is beginning to invade the pages of Vogue and other fashion magazines. Mr. Detwiler himself is usually at the counter, sewing colorful swatches together and ready to tell equally colorful stories of every item in the store – from a woolen jacket made from a 19th-century Amish blanket to a pants made from a 1980s “French”. Bag of “Fryzz” potatoes. Its pop-up is currently rented until August 31.

Five blocks east, foodies awaiting the reopening of Jordan Kahn’s two-Michelin-starred restaurant, Vespertine, satiate their appetites across the street at the Destroyer, the lunch cafe and breakfast. -Mr Kahn’s lunch. Comprised of a dozen tables and stools set out on the sidewalk outside a crisp white refurbished mid-century industrial building, Destroyer offers a simple, inexpensive way to sample Mr. Kahn of contrasting favors and seasonal foraging. Unlike Vespertine, which required a lot of planning in advance for reservations, one can often just walk in to enjoy revolutionary dishes like the caramel-glazed beef brisket in a lettuce wrap, or the beef tartare dipped in grains. grilled and smoked egg cream drizzled with turmeric ginger. latte or kumquat melon tonic. Brunch costs around $ 35 per person.

Another groundbreaking place is the Wende Museum, one of the first museums to reopen in Los Angeles. Imagined by historian Justinian Jampol, the Wende is a collection worthy of the “Citizen Kane” of Soviet bloc art and design spread across an elegantly remodeled concrete armory. Against this backdrop, stripped of its political threat, Eastern European propaganda, housewares and furniture look futuristic and cool, as if you suddenly found yourself in the lair of a James Bond villain. Even the clenched bust of German Communist leader Ernst Thälmann looks eerily gleeful framed by the palm trees and bubbling fountains of the museum garden. The best memory of the exotic shop of the Wende: a stylized 903-page catalog of the East German collection of the Wende, personally produced by the king of art book publishing, Benedikt Taschen, one of the founders of the museum ($ 90). Admission is free, but online reservations are required. Currently only 20 bookings per hour are allowed, so there is plenty of room to spread out.

While indoor masking laws have dampened some of the inner festivities of downtown Los Angeles, the high life has resumed in the neighborhood’s rooftop bars and restaurants. The trendy and famous crowd at Ace Hotel’s refurbished Upstairs Bar, and those yearning for the Mexico City vibe head to LA Cha Cha Chá, overlooking the Arts District.

Perhaps the most impressive sky bar, Spire 73, hardly had a chance to make its mark until the pandemic forced it to close last year. It reopened on July 4, and its 73rd-floor perch atop the Wilshire Grand building makes it the tallest open-air bar in the Western Hemisphere. Lines of focal points warm the view of the Los Angeles light network that dissipates into the sea and distant mountains. The panoramas are paired with excellent craft cocktails, including the house version of the old-fashioned one, made with a small batch of consecrated Elijah Craig bourbon with dashes of bitters and maple syrup, or a white negroni with lillet. white replacing vermouth. Drink (and maybe grab a burger), as there’s a minimum of $ 60 per person.

For a smaller, more iconic elevator, head to Angels Flight, the small tram built in 1901 to take pedestrians to Bunker Hill in the middle of downtown. After three tumultuous decades of accidents and decay, the tram is completely renovated and is finally running (masks required). The two tram funicular cars, named Olivet and Sinai, take turns going up and down the steep 298-foot rail. If the streetcar sounds familiar to you, it’s because it has appeared in dozens of films, including “Kiss Me Deadly” and “La La Land”.

Angels Flight is an especially glamorous ride at night, when the Art Deco and Beaux-Arts buildings of the city center disappear below and you emerge into the modern hilltop cityscape, crowned by Frank Gehry’s Disney Hall and the Broad Museum recently reopened. You only pay the dollar fare at the kiosk at the top of the streetcar, making it one of the best deals for exploring a growing Los Angeles.

Who are the voices behind Disney’s “The Hunchback of Notre-Dame”?

If you travel a lot, get your TSA preclearance in Amarillo