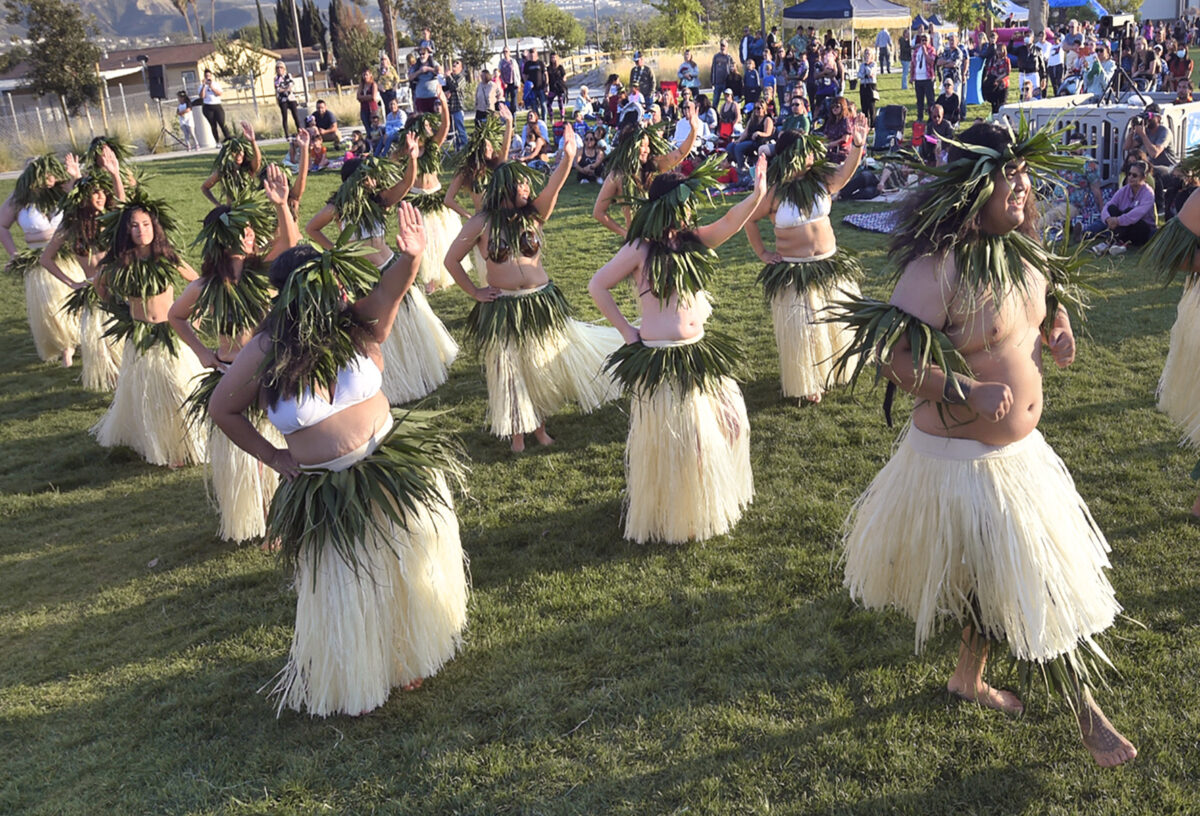 The Canyon Country Community Center held one of its first community events since opening five months ago and drew a crowd of about 600 on Friday.

The event, titled “Celebrate: Polynesian Islands,” is the first in an ongoing series that the community center will host, designed to highlight and raise awareness of the different cultures that make up Santa Clarita.

“It’s really geared towards showcasing the diversity that we have here in Santa Clarita by showcasing a different culture on the first Friday of every month,” said event coordinator Casey Miller. “So we’re really looking to do that through the music, the food, the dance, the art, the activities and the customs that you would experience if you were to visit that country or that place in the world.”

The exhibit, titled “Remember the Stars Above the Ocean,” features artwork that spans more than 20 years of Maddux’s career, largely inspired by his childhood in Hawaii.

“I think the colors I use are very similar to the colors in nature,” Maddux said. “I mean, they’re a bit bright, but I also think maybe that kind of brightness aesthetic has to do, again, with the influence of Hawaii and living in Southern California. .”

Maddux has always been an artist at heart, but also worked in the textile industry for several years, which she says influenced the many pieces of tapestry she exhibited. These, and his other works, featured bright color schemes influenced by the sunny places of his origins, but also a few pieces with a noticeable darker scheme.

“I painted them in 2002 in New York, which was a very dark time, quite frankly,” Maddux said. “So I’m actually a little surprised to see that too, the palette. I guess you could attribute that to the time, you know, and the place.

As guests exited the lobby with the Maddux exhibit and made their way to the event space, they were greeted by the smell of piles of ground roast pork in front of them. The event also featured several food trucks delivering Hawaiian and other Polynesian-inspired dishes which contributed to the sweet and salty smell in the air.

Pop-up tents were lined up in two rows that led to a stage, where different music and dances from various Polynesian cultures, including Hawaiian and Tahitian, were performed.

The tents offered activities and exhibits that were both educational and entertaining, including the history of tiki masks, palm weaving demonstrations, lei making, Maori tattoos and an interactive display of the ipu heke instrument .

Ipu heke is a percussion instrument, used in the performances of the event, which is made up of two gourds tied together with tree sap.

The ipu heke used in the performances at the event were handcrafted by John Escobar. Escobar, who started making instruments a few years ago, said the ipu heke and the Polynesian dances associated with them are a great way for people to learn about the culture.

“I feel like a lot of people need to know the history and culture of Polynesia,” Escobar said. “It’s always good to show people their customs and what they have to offer. It’s a cultural thing, you know. I mean, if you’ve never been to Hawaii or any of the other islands, it’s good to educate yourself on the basics of dance.

Gladys Farrell, who leads the Kala Ke Ke Pacific Island dance company which performed at the event, said that when these instruments are made, the player chooses which gourds an ipu heke will be made from. Farrell describes the act as “a spiritual experience” and that “the hula is an extension of yourself”.

The dance company performed dances from a few different Polynesian cultures, which may be hard to tell apart at first, but Escobar says there is a distinct difference.

“The hula is softer, the Tahitian is more exotic,” Escobar said. “That’s the big difference. The hula dancers are, like, fully clothed, Tahitian girls show a lot of meat.

Farrell also said dancing was a great way to connect not just with Santa Claritans, but with your own community.

“I think it’s great that Santa Clarita highlights the Polynesian people, because I know they’re there. We just don’t know where they are. So that’s really good,” Farrell said.

Kin Farrel, Farrell’s husband who also leads the dance group, was also pleased with how the event went and said that whenever a festival like this is held, people show up.

“Oh, that’s awesome. It’s an honor and we really appreciate it to be here for so long. It honors us as well. So we’re having a Pacific Islander festival and Santa Clarita always shows up.

The next “Celebrate” event at Canyon County Community Center is scheduled for Friday, May 6 and will feature cultures from Santa Clarita’s international sister cities.

For more information, visit the community center website at https://bit.ly/3NHlZca