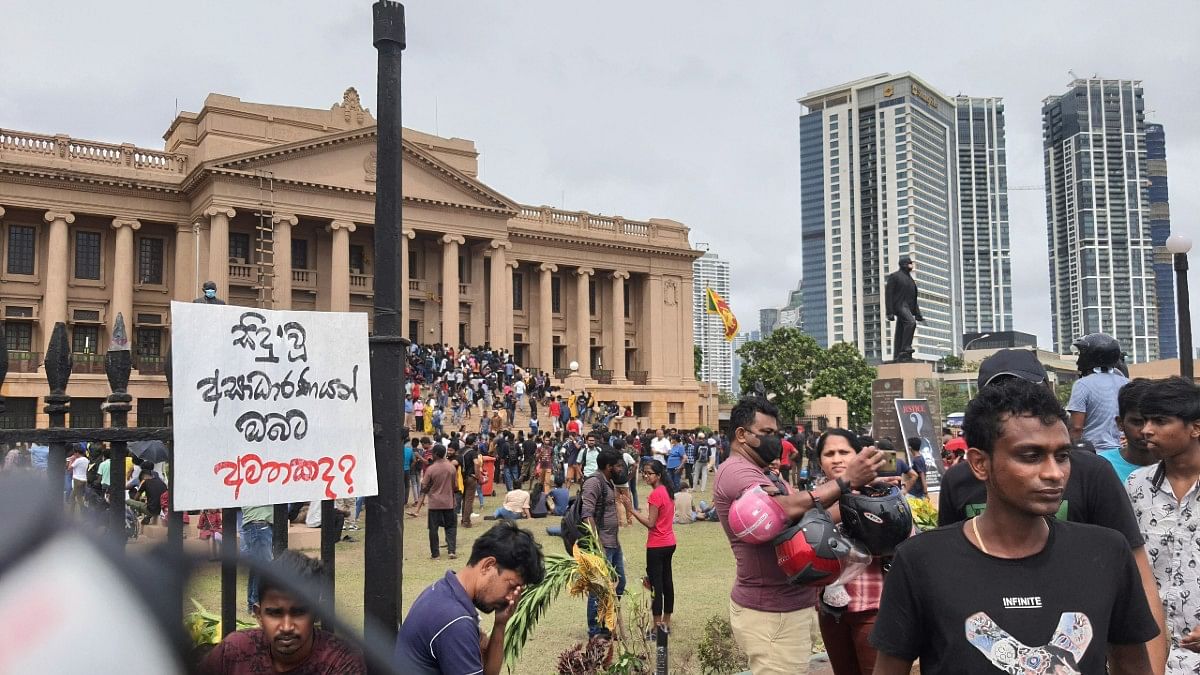 Dove: During the July 9 anti-government protest in Colombo, people broke into Sri Lanka’s presidential secretariat and the official residences of the president and prime minister.

On Sunday, the day of Eid al-Adha, Sri Lankans marched out in their thousands to reach the lavish high-security state mansions that had borne the brunt of the attacks the day before. Colombo at present is quiet but the VIP area is packed with a steady stream of people entering these premises. The public mood, meanwhile, remained the same: President Gotabaya Rajapaksa is expected to step down.

In contrast, the rest of Colombo wore a desert look with few vehicles on the roads. A handful of people were seen at bus stops, perhaps knowing public transport would be hard to come by. Most commuters walked or cycled tiredly in wet weather.

A group stopped in front of Ranil’s personal residence, eager to find out the situation inside, but the high walls blocked their view. The road outside was littered with smashed barricades, shards of broken glass and hastily discarded shoes after Saturday’s attack. In the afternoon, police were seen in the area, some inside the burnt-out house to investigate what had previously been a VIP address.

The thick metal fences were forcibly pulled down by protesters at the presidential secretariat as thousands of people descended on the site on Saturday. The main room was open to the public. It now houses the “public library” which was at the main protest site called “GotaGo Village”.

About a kilometer away, the large metal gates of the avenue leading to the gate of the President’s House had been rammed with the help of a truck, said the demonstrators present on Saturday.

The place looked more like a picnic spot as people swam in the pool whose water had turned gray with dirt. The men laughed having fun in the pool and joked with those who stood outside to join them and “swim” with them.

People were mostly curious to see what it felt like inside the lavish property. Some posed for selfies next to a black BMW that had long since lost its metallic logo. People picked up things to bring back as souvenirs – a woman took a chair with her from the president’s residence.

A protester told ThePrint that Saturday was special and it was people power that forced President Gotabaya Rajapaksa to announce July 13 as his last day in office.

A man walked around the bathroom of the premises, looking for the shower head. Three washing machines, one of which was turned into a trash can, remained unattended.

Near the washing machines were three men who confessed that the gadgets belonged to its former occupant. “Take it with you and go. Either way, we paid for it (read, taxpayers money),” one said.

At the President’s House, protest organizers used loudspeakers to educate people about the mansion’s history dating back to the colonial years. They tried to control the crowds, urging them not to jostle each other. Some of them said they would coordinate with the police to ensure no major damage was done to property.

Elsewhere, cars have remained lined up on the roads and streets because their owners know petrol and diesel are hard to come by. The following fuel shipment will take place between July 11 and July 14.

The ingenuity was noticed here and people parked their vehicles ahead in the hope of getting a harder to find resource than gold in Colombo. Lakmal, a motorist, said he waited in line for four days for petrol. “Things get nasty when people try to skip queues in the middle of the night,” he said.

The situation is aggravated by fuel rationing because automobiles can only get stock for three days. Motorists resort to all tricks to stay afloat. For example, Lakmal felt that it was only worth charging 4,000 Sri Lankan rupees for a 13 km journey. The same ride in an Uber car says around 1000 Sri Lankan rupees, but there is none available.

Another three-wheeler driver justified the high charges by saying he and his ilk were waiting days to earn a living. The motorist, who said he participated in the July 9 protest, said police had exhausted all tear gas canisters to target protesters. “They (read, the police) are dogs. I will never ride any of them again at night after what they did on Saturday,” he said.

Beanie Feldstein to Leave FUNNY GIRL Early, INTO THE WOODS Opens, and More!