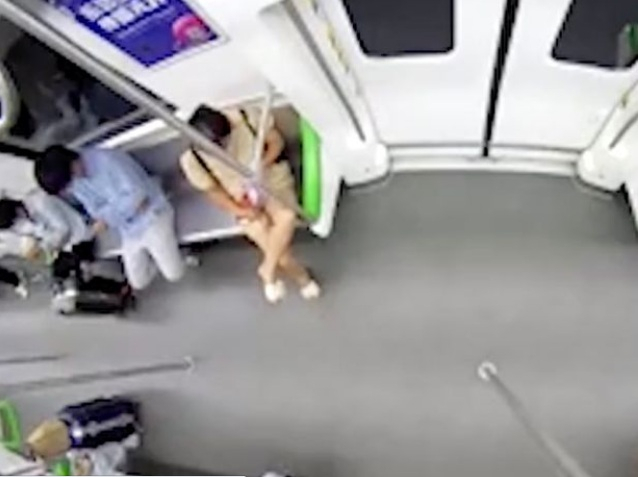 A woman in China has been arrested after being caught showing off her private parts during a steamy striptease that she broadcast live to stunned commuters on a subway ride. The woman, identified only as Liu, from the city of Huazhou in China, was caught on CCTV showing off her underwear on a subway ride in the Vietnamese border town of Nanning.

Although the incident happened in May, she was only recently found and arrested. Police have also released footage from the naughty striptease where the woman is seen live streaming her act that led to her arrest earlier this month.

Images released by police show Liu, 38, sitting next to two commuters on a busy train, according to The sun. She then suddenly turns on the phone’s camera and points it at her legs and lifts her dress up and starts flashing the camera over her underwear and then onto her private parts.

However, it doesn’t stop there. She continues to show off her vagina and begins live streaming it to viewers. She then asks viewers to purchase her virtual gifts and continues to display her private parts.

“Come on, I’m happy as long as you enjoy watching it,” she told her fans on the app. An employee, who is said to be the train operator, is then seen walking past her, but Liu seems unfazed and continues to broadcast her naughty video live.

Viewers, who watched her in the act, more than enjoying it, were shocked. The entire episode was unfortunately caught on CCTV inside the train and the police launched a manhunt.

Although no one filed an official complaint, police from the Nanning Subway arrested Liu in Luchuan County, Guangxi. She was charged with one count of reproducing, posting, selling or disseminating pornographic electronic information for profit seeking through the Internet or a mobile communication terminal.

Police are still investigating and further charges could be laid against the indecent woman. It is not known what punishment Liu’s actions would entail, but it is expected to be severe given that China does not tolerate such things, and certainly not in public.

Viewers, who watched the live broadcast of Liu’s scorching act, thanked the police for arresting her. One said: “I didn’t see this in the CCTV and I’m shocked the people sitting around just watched.”

Earlier this year in Russia, a woman was filmed showing off her sexy lingerie with a matching garter belt as she posed for the CCTV camera before walking away.

Philanthropist Annette Bloch dies; was a donor to the Desert AIDS project