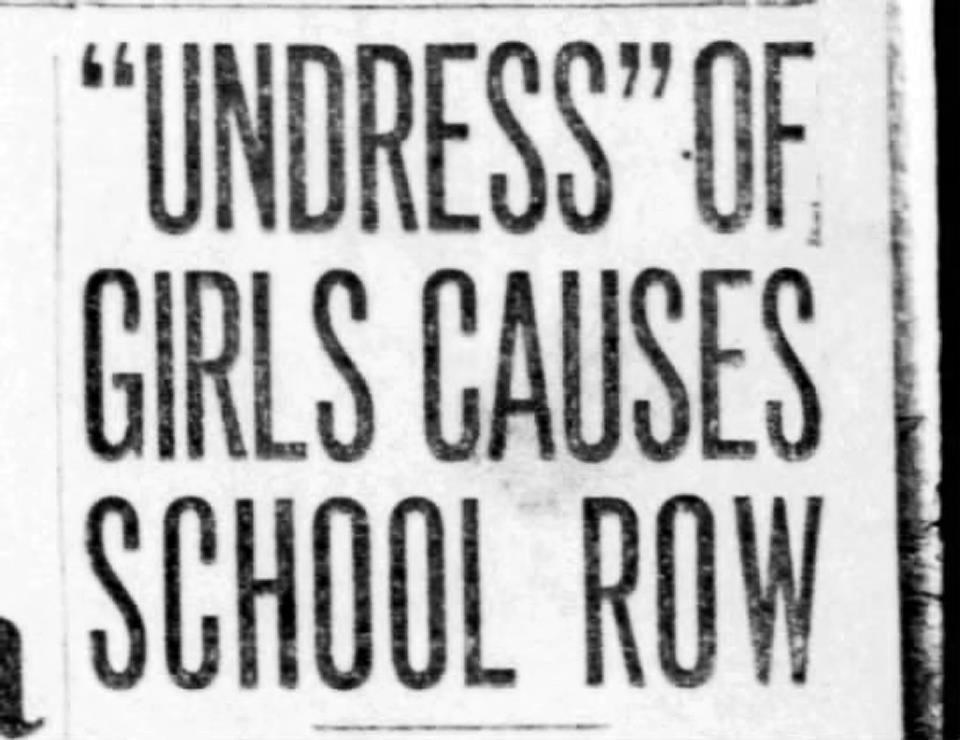 “Taxpayers don’t pay for their daughters to learn to move their legs,” one administrator said of a 1928 concert at Burnaby South High School that featured two girls dancing in “Hawaiian” outfits that they had made.

As Béatrice-Desloges Catholic High School in Ottawa cracked down on spaghetti straps and short skirts last week, I came across the story of two teenage girls whose exposed arms and legs sparked school board censorship. of Burnaby and sparked a similar media storm almost 100 years ago.

In 1928, “Billie” Stokvis and Mabel Porter took the stage at the old Edmonds Municipal Hall for a dance number at a Burnaby South High School concert.

They wore sleeveless dresses with grass skirts that they had made at the school’s Needlecraft club.

The gig itself didn’t get much press, but, seven weeks later, the girls made headlines thanks to school board president Herbert Stanley.

At a committee meeting on April 4, 1928, Stanley took aim at Burnaby South principal Clifton G. Brown for allowing girls to turn up at a school concert in what Stanley described as a state of “Hawaiian undress”.

The president said he was prepared to seek Brown’s resignation for allowing the posting and forced a motion to compel the principal to appear before the board and explain himself.

“Taxpayers don’t pay for their daughters to learn to move their legs,” he said in an April 19, 1928. Vancouver Sun article.

Soon it was everywhere.

And, like the recent dress code blitz in Ottawa, the administrators’ comments sparked outrage.

At an “outrage meeting” on April 17, 1928, attended by more than 300 parents and taxpayers, citizens demanded that Stanley and Harper retract their statements.

Some have called for their resignation.

“I see nothing immoral in these young girls dressing like two young women from a friendly foreign nation,” Reverend WJ Beamish reportedly said in an April 18, 1928. Province article. “I think Mr. Stanley should be asked to remove the stain on the reputations of these two girls.”

Warden AK McLean agreed, noting the damage the school board president’s comment had on Burnaby’s reputation.

“Scandals like these do our municipality no good,” he said. “Reports of this case are being broadcast across Canada on news wires.”

“We will see in the next elections”

A night earlier, however, Stanley had insisted he never meant to tarnish the girls’ reputation, and the committee expressed “deep regret” that his words had been “misinterpreted by a certain section of the press”.

At a meeting on April 16, 1928, the all-male committee reviewed a press photo of the girls in costume and, when challenged, Stanley said the outfits were “very smart, very pretty” but not appropriate for a high school concert. , according to a Province article published the next day.

A majority of the committee then doubled and passed a resolution:

Ahead of the vote, administrator George Grant said a ‘great majority’ of the public had been ‘perfectly satisfied and saw nothing of an offensive nature’ in the school concert, according to a Vancouver Sun story of the encounter.

But Stanley hit back, saying they would find out how the majority really felt when the election came.

“We’ll see in the next election whether taxpayers want to support a man who wants to put an end to the exposure of feminine charms,” ​​he said.

Stanley lost his seat in the election eight months later.

Grant then served as president.

And Brown continued as principal of Burnaby South for another seven years before becoming a school inspector.

In the early 1960s, the city gave its name to a swimming pool.

See what’s inside a former Chesterfield nightclub which closed 10 years ago and is now up for auction for £270,000