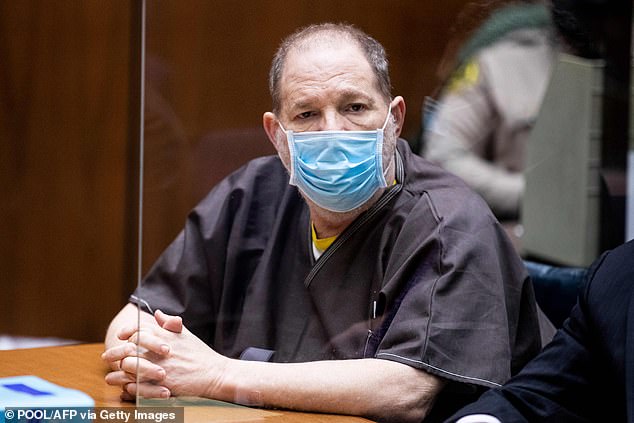 A judge on Monday refused to delay disgraced film producer Harvey Weinstein’s rape and sexual assault trial in Los Angeles until a controversial film about his case is released in November.

With 269 people on the list of prosecution witnesses, the trial is expected to last six to eight weeks.

In his motion today to delay the trial, Weinstein’s attorney Mark Werksman argued that a ‘publicity storm’ over the upcoming Brad Pitt-produced film, She Said, could ‘damage to the jury” against the single film’s big hit.

She Said, which hits theaters November 18, stars Carey Mulligan and Zoe Kazan as New York Times reporters Megan Twohey and Jodi Kantor who wrote an expose on Weinstein in 2017.

Harvey Weinstein’s rape and sexual assault trial will proceed as scheduled, beginning October 10. He is pictured in July during a hearing

Werksman said billboards, other advertisements and social media about the film will highlight the “sinister and negative aspects of this case” and could sway a jury against his client.

But, as Weinstein, in a brown prison jumpsuit, sat in a wheelchair outside court today, Judge Lench denied Werksman’s request to delay the trial until at least January to allow publicity on the film to die out.

“I don’t think there will be a time when there will not be media coverage of this case,” the judge told the court.

She also denied Werksman’s request to postpone the trial until his appeal is heard in New York where he is serving a 23-year prison sentence following his 2020 rape conviction.

Last Wednesday, New York State Appeals Chief Judge Janet DiFiore ruled that Weinstein — who has always insisted on his innocence — would be allowed to appeal, based on his lawyers’ claims that he had not had a fair trial.

His lawyers argue that his New York trial judge allowed several witnesses to testify about acts Weinstein was never charged with.

And they also argue that a juror failed to reveal she had written a book about sexual predators, which her legal team said should have disqualified her from serving on the jury.

Wednesday’s ruling means the New York State Court of Appeals will hear oral arguments in the Weinstein case next year.

The court could uphold his conviction. But if she overturns it and orders a new trial, he could be released on bail pending a new trial.

New York Times reporters Jodi Kantor and Megan Twohey are shown in April 2018 in New York City. They wrote an expose on Weinstein in 2017

In Criminal Court in Downtown Los Angeles today, Werksman pointed out that part of the prosecution’s case against Weinstein was based on his conviction in New York ‘which could be overturned on appeal’ .

“The prosecution (LA) should not be allowed to introduce this conviction when it could be overturned” by the New York Court of Appeals, said the lawyer.

Los Angeles Assistant District Attorney Paul Thompson hit back, telling the court that even if the New York Court of Appeals agrees to hear the case next year, it could still take a long time. before it renders a decision on the maintenance or annulment of its decision. Conviction in New York.

If the start of Weinstein’s trial in Los Angeles was delayed until after New York’s appeal decision, he said, “We could be in a position of waiting years to try this case.”

“The issues raised by the defense are not sufficient grounds for a prosecution,” he said.

Telling the court that “trying to circumvent what the New York Court of Appeals will do is problematic for me,” Judge Lench denied the motion to delay Weinstein’s trial.

The judge also promised to speak to medical professionals at Twin Towers prison in Los Angeles, where Weinstein is being held after his legal team complained that the producer suffered from bad teeth and wanted his dental issues resolved before the trial.

His attorney Werksman told the court that Weinstein “could look unpresentable” with missing teeth. “We don’t want the jury to think he’s a mess,” he added.

If convicted on the LA charges, the man who helped spark the #MeToo movement is looking at a maximum total sentence of 140 years in prison.

He has already pleaded not guilty to all 11 counts in his first appearance in court in Los Angeles in July 2021 after being extradited from New York where he is serving a 23-year sentence for the rape and sexual assault of two women. .

Last May, prosecutors asked Judge Lench to allow 16 other alleged victims – including actresses Daryl Hannah and Rose McGowan – to testify against him at his upcoming trial.

Deputy DA Thompson argued that evidence from the other 16 women was important because it showed Weinstein’s ‘MO’ (modus operandi) and their experiences offered a ‘high level of similarity’ to the charges Weinstein faces in Los Angeles. Angeles.

But Werksman fired back, saying the prosecution’s goal with this long list of “uncharged despicable acts” was to “make the jury hate Mr. Weinstein.”

Calling 16 other women — none of whom proved their case in court — was a “cynical ploy to overwhelm the court,” said Werksman, who accused prosecutors of trying to paint Weinstein as a “versatile rapist, for example.” all the time, 24 hours a day, 7 days a week”. .’

He called the large number of alleged additional victims “staggering, absurd and ridiculously damaging”. and added: “No one will remember who did what to whom, when, where and why. It’s totally irrelevant, totally useless.

“We already have a great abundance of witnesses in the 11 charges in Los Angeles… The prosecutors are wasting our time. It’s a big feint and your honor shouldn’t tolerate it.

Judge Lench ruled that all but one of the alleged victims from before 2000 should be excluded, leaving only six of the 16 she will allow to testify. Hannah and McGowan are not one of those six.

Last December, Weinstein’s attorney, Werksman, tried to have all charges dismissed from Los Angeles, filing a motion arguing that the grand jury that indicted his client had been “manipulated” by prosecutors who presented “weak, lame, false and misleading” evidence. by “pseudo-scientific” testimony from expert witnesses.

But Judge Lench denied the motion, telling the court she believed prosecutors ‘did not manipulate the grand jury’ and that she ‘did not find any irregularities’ in the evidence presented by prosecutors. to the grand jury.

24-Hour Check Cashing Near Me: 6 Places to Cash Checks After Hours