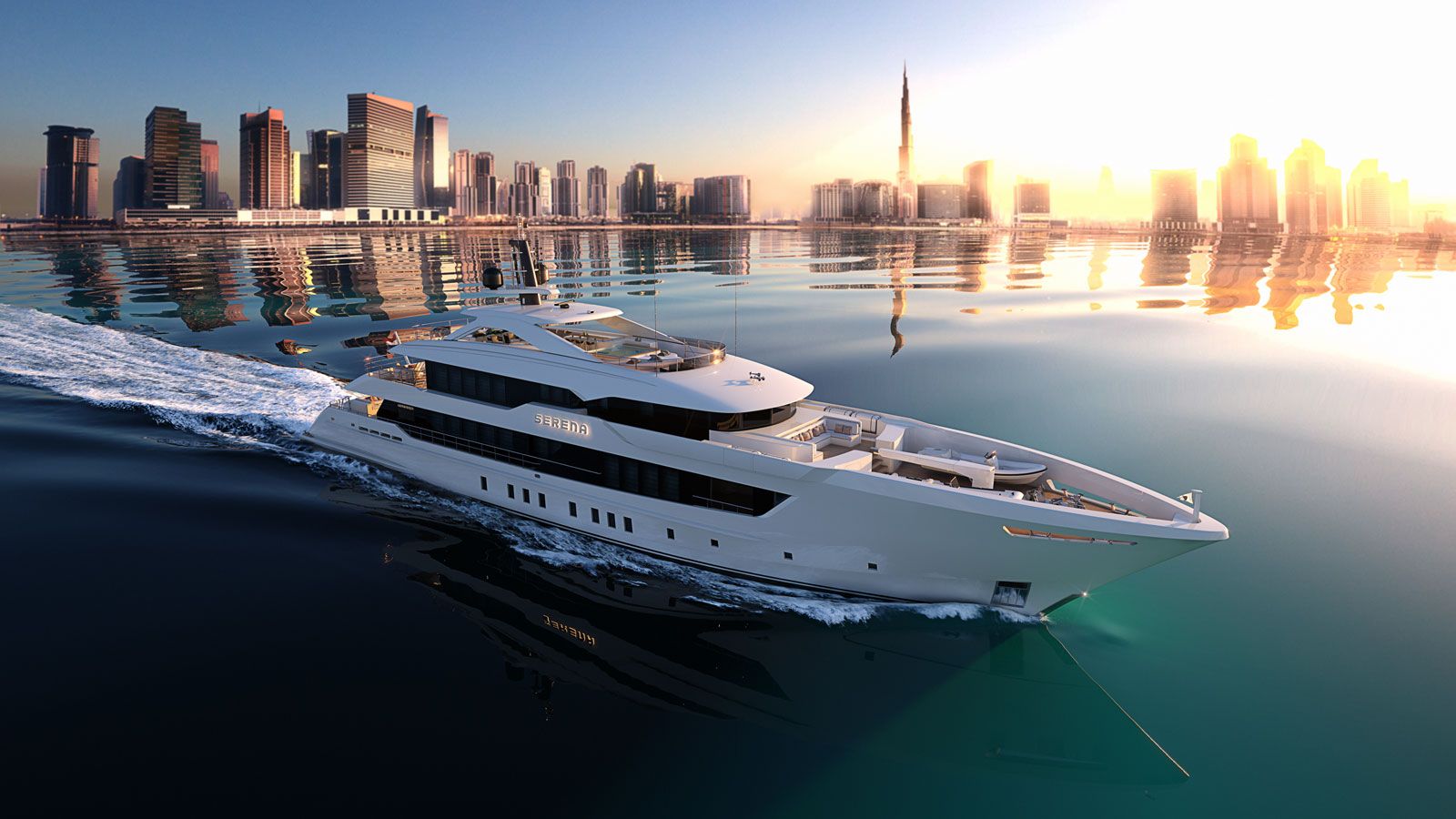 HeesenThe design of its 55M Steel superyacht is one that continues to evolve. The range now consists of eight yachts, each better and different than the last.

For example, delivered in 2020, MoskitoThe interior layout was bigger, better and complemented by panoramic windows – a feature that was not fully optimized in previous units. Prior to her, 55M Steel’s design featured smaller social spaces and a reconfigured five-cabin layout. After one cabin was moved to the upper deck as a VIP suite, each cabin could be expanded.

Then came the Apollo project. Due to be completed in 2023, it will be different from Moskito in terms of its larger skylounge and modified wing station. However, Heesen’s creative ideas for the 55M Steel didn’t stop there, and the yard has since revealed Project Serena (YN 20555) which is set to hit the water in Q4 2024 as the eighth unit in the class. 55m.

With exterior lines by designer Frank Laupman of Omega Architects and an interior by Italian studio Luca Dini Design & Architecture, Project Serena has its own image. With the hype around the Serena project still high, Heesen’s top team members and yacht designers are sharing what’s new in this version of the 55M Steel design.

Heesen is the only North European shipyard currently able to offer a 55 meter steel hulled yacht with a fast delivery time. “The big advantage of buying a fast delivery yacht built to Dutch quality is that all the big decisions have been taken out of the equation,” says Robert Drontmann, Sales Manager at Heesen.

Although delivery times are fast, the date can change depending on when the owner enters the equation. The sooner an owner purchases the project, the more possibilities for customization. “Our new boats in the 50-55 meter range can all be built as hybrid vessels if the customer joins the construction phase early enough,” explains Heesen CEO Arthur Brouwer. As the interior design allows any potential owner to customize the yacht to their liking, other bespoke modifications can include furniture, materials, color combinations and interior fittings.

Suitable for all cruising regions

While Heesen’s fleet is mainly located in Europe, the Dutch builder’s superyachts can be seen all over the world as both perfect private homes and popular charter yachts. As the Serena project was unveiled as part of the 28th edition of the Dubai International Boat Show, the builder highlighted how well suited the yacht is to the warmer climates of the Middle East. “It’s hard to think of a more suitable place for Heesen to present the Serena project,” says Drontmann, who confirms that the Middle East is an exciting market for Heesen.

As more and more superyacht owners are beginning to see the beauty of cruising in the Middle East – particularly from Oman and the Red Sea to Al Marjan Island in Ras Al Khaimah – there has been an increase in inquiries for the Dutch shipyard. “We’ve seen a general trend of increasing inquiries over the past year, and that includes customers in the Middle East,” Drontmann adds.

“The area has seen significant developments which have made it more attractive as a leisure destination. And the construction of new marinas certainly adds to the attractiveness of sailing locations, creating an additional boost effect,” he adds. “In addition, our speculation program is a great success and a key selling point for owners in the Middle East and North Africa regions.”

The uniform of a Heesen yacht is the fuel-efficient fast-displacement hull form, long ocean crossing range and huge interior volumes – and the Serena project is no different. What is different, however, is its zigzag exterior design. Similar to the muscular lines of her sister ship Project Apollo, Project Serena’s lines cleverly stretch along the optical length and balance the air draft. “While we love our original 55m steel design with the vertical windows, we felt it was time to take an evolutionary step,” says Frank Laupman of Omega Architects.

Compared to her sisterships, the Serena features a slightly more aggressive profile thanks to the continuous sheets of tinted glass which, in turn, provide a very light environment. “We opted for a larger expanse of floor-to-ceiling glass, with no mullions, in the main salon and sky lounge,” adds Laupman. “Frank did a great job with the windows and the way they were treated. As a result, you get a tremendous amount of natural light and lots of views,” Brouwer said. Another notable addition to the exterior design is the fully equipped bar surrounding the hot tub on the terrace.

In terms of onboard accommodation, Project Serena houses a sizable VIP cabin on the wheelhouse deck and four good-sized guest cabins on the lower deck. In addition, the owner is granted a large suite on the main deck with new dressing rooms and a French balcony. The addition of the balconette allows owners to open the windows, invite fresh air into the space and feel closer to the sea. “This is one of the most impressive innovations of the last version of the 55m Steel. It’s something really unique that fundamentally changes the space,” adds Visser.

With six bedrooms in total, the number of cabins should be one of the attractive selling points for the Middle Eastern market. “It is ideal for owners in the Middle East who value a lot of guest accommodation,” says Heesen CCO Friso Visser. The space on board is also appreciated by those who turned to yachting after the pandemic to spend quality time with family and friends in a safe environment. “Yachting has always been a vital way to discover new places and gain new experiences, and never has that been more true than now,” says Visser. “It’s one of the great freedoms and feeds the nomadic soul that exists in each of us. I think that today more than ever, a yacht represents a safe place to meet with loved ones.

The exterior deck areas of the 55M Steel have been improved, not only for their appearance, but also for their functionality. Most notably, additional stairs have been incorporated into the design to facilitate crew access and circulation, meaning owners and guests enjoy better service and a more private and comfortable setting. “The Serena project is an excellent example of an ideal family yacht, with guaranteed privacy and a fantastic sundeck with ideal crew access,” says Drontmann. In addition, the guest stairs have been widened between each deck. The exterior layout has also benefited from a relaxed open-air setting aft of the yacht to encourage a more relaxed lifestyle at sea.

Having already sold nine yachts to date since the start of 2020, Heesen sees the 50-60 meter yacht sector and speculation built in this size range selling out quickly. To find out more about what the Dutch yard has in the shed and what will come out of the 55M class, including the Serena project, Click here.