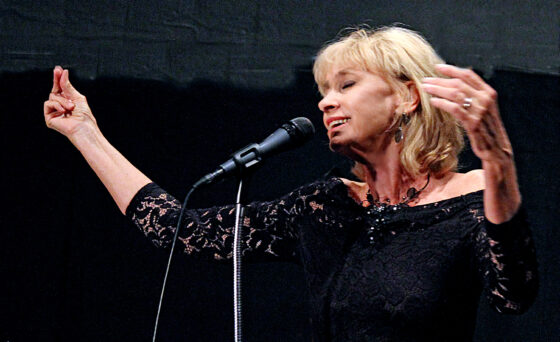 Ingrid performed her solo show seven years ago at the Mary D. Fisher Theater, but this show will share new songs and stories from her recent adventures as an international jazz/cabaret artist.

Many years ago, Ingrid, a Swedish-born, came to the United States from Europe, with the dream of becoming a singer and performer. Before owning her red suitcase, she traveled lightly, arriving at LAX with her backpack filled with high hopes and big dreams. Ms. Hagelberg was hired to headline John Van Drutten’s Broadway hit ‘I Remember Mama’, a play about a Norwegian immigrant family in the early 1900s. Glendale Center Theater Best Actress.

After traveling the world, recording three CDs and performing in the best venues in Tokyo, Paris, Los Angeles, Warsaw and Frankfurt, she landed in Sedona. In 2010, she released her album, Songs from my red suitcase, which delivers a fine selection of autobiographical songs. His current multimedia show is comprised of a delightful, well-paced monologue with projected visuals and musical interludes, featuring original songs from his albums and a few additional gems. The whole package magically takes you on Ingrid’s personal journey. It is imbued with subtle humor and emotional depth. She presents it all masterfully in a style all her own.

Ms. Hagelberg takes you on a journey down memory lane to her dreams and aspirations as a 5-year-old girl. She exposes her initial fears, insecurities and vulnerabilities, which so far have remained hidden deep within her soul and, by symbolic extension, in her well-traveled red suitcase. Being extremely brave and adventurous, she was able to achieve success from the moment she left home for Paris at the age of 18. Ultimately, Ingrid’s extremely personal journey was one of discovery and creative breakthrough that came, against all odds, from setting powerful intentions.

Her loving embrace of her audience aims to inspire you to listen to your own inner voice and follow your dreams, then respond bravely by stepping into the unknown, despite your doubts and fears. Overall, Ingrid’s story is one of an exuberant leap into the unknown, not just once, but many times. She invites you to come to the Mary D. Fisher Theater to enjoy an intimate evening of storytelling and song. It is sure to warm your heart. You will leave the theater feeling inspired and appreciated, knowing that dreams can come true.

“Songs From My Red Suitcase” with Ingrid Hagelberg “Vismaya” takes place Saturday, January 29 at 7 p.m. at the Mary D. Fisher Theater. Tickets are $25 in advance and $30 at the door. For tickets and more information, please call 928-282-1177 or to order online, visit www.SedonaFilmFestival.org. You can also purchase tickets at the Sedona Film Festival office and the Mary D. Fisher Theater, located at 2030 W. Hwy. 89A, in West Sedona.