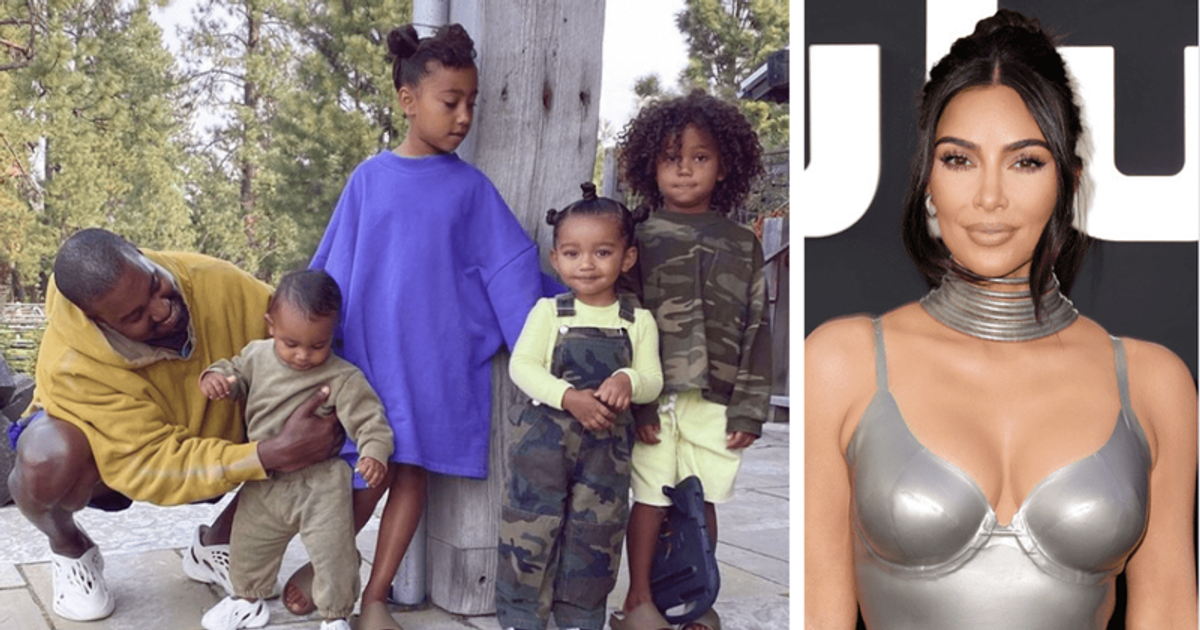 Kim Kardashian decided to recognize her ex-husband on Father’s Day and called him the “best dad of their four kids” on her Instagram story. Kim shared two stories of Kanye with their children Noth, 9, Saint, 6, Chicago, 4, and Psalm, 3. Kanye could be seen smiling and happy as he spent time with his children. The personal life of the ex-couple has been in the center of attention for the past few months. Their co-parenting struggles also make headlines with Kanye often accusing Kim of not allowing him to see his children or call his ex-wife’s parenting.

Kim captioned the story, “Thank you for being the best dad to our babies and loving them the way you do. Happy Father’s Day Ye.” In the second story, you can see the curator of the ‘Donda’ album in his compound in Wyoming surrounded by his children. The duo were also spotted at their daughter North’s basketball game and it was the first time they had been spotted together since Kim’s exotic vacation with boyfriend Pete Davidson. In the past, Ye has been seen acting erratically while seeking Kim’s attention.

The 41-year-old makeup mogul also posted a Father’s Day tribute for her own stepfather Caitlyn Jenner (born Bruce Jenner) who was married to her mother Kris Jenner for 23 years before they split in 2014. also got to see Kourtney, 43, Khloe Kardashian, 37, Kendall Jenner, 26, and Kylie Jenner, 24, in Kim’s Instagram story which read, “Thank you for raising us and being the best beau- Father. Happy Father’s Day.”

She also had a nice post for her late father, Robert Kardashian Sr., whom she called “the best dad ever.” “The kids asked me how I would party with you today if you were in heaven and they [had] cutest suggestions,’ the 41-year-old reality star – 431.2 million social media followers – wrote via Instastory. “I miss you and love you with all my soul.”

Kim’s Instagram wishes for Ye didn’t sit well with some active followers who were quick to call her out.

Kim and Ye filed for divorce in 2021 and have maintained a one-mile distance since the rapper repeatedly attacked her 28-year-old boyfriend online. Ye accused Pete of destroying his family, threatened to beat him, and insulted him. While the beef between the rapper and comedian was engaging for fans, it certainly wasn’t healthy for either party. Now the internet has decided to troll Kim yet again for wishing Ye on Father’s Day. One user wrote, “She should stay away from our king. Respectfully.” Another user wrote, “This is the same person who didn’t even tell her the location of her daughter’s birthday party, bruh.”

She should stay away from our king. Respectfully

One user said: “She’s not doing her any favours, ‘see her kids more’, they’re her kids too. Just days ago she was insinuating something on her show, her silly fans were already throwing words like then today this mess. She’s not fooling anyone. Another user wrote: “Tonight on Dateline, DOMESTIC ABUSE ALLEGATIONS. Next week on Today: Kim Kardashian and Father’s Day dances. It’s like a parody.”

She is not doing him any favors, “see more her children”, they are also her children. Just a few days ago she was insinuating something on her show, her insane fans were already throwing words like domestic violence around this mess today. She does not deceive anyone.

Less than a week ago, Kim called Ye and claimed her marriage was worse than people thought. Recalling her remarks, one user said, “Right now I don’t think Ye wants her wishes after all the bullshit she said about her. @KimKardashian we won’t fall for it.” Another user said: “It’s like during WWII Hitler made the song ‘Happy Birthday President’ – Kim is the definition of a Crazy Maker.”

Right now, I don’t think Ye wants her wishes after all the bullshit she said about him. @KimKardashian we will not fall into the trap.