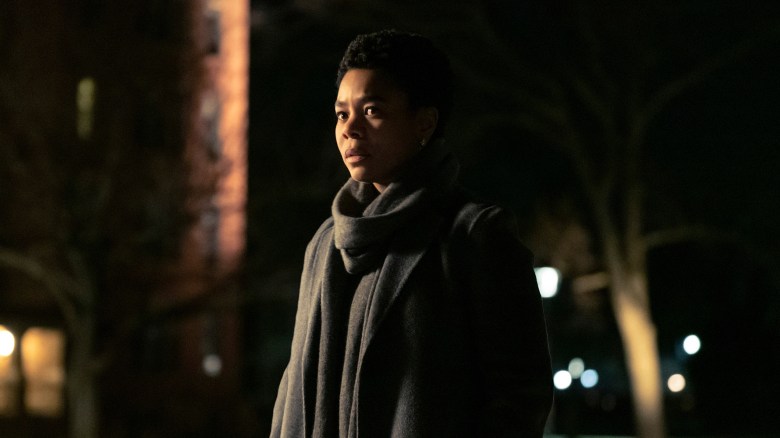 Sundance: Three women attempt to survive their experience at a historic New England college in a horror film that evokes both ‘Candyman’ and ‘The Shining’.

A twisted tale that combines elements of ‘Candyman,’ ‘The Shining,’ and ‘Get Out,’ Mariama Diallo’s ‘Master’ isn’t the kind of traumatic horror film that questions racism solely as a fear in and of itself. . Diallo is too smart for that. This riveting Panic, a psychologically brutal witch and ghost story, draws viewers in with clever writing and even more brilliant performances. He explains colorism, racial overreach, microaggressions and the overwhelming pressures of black excellence not as cudgels of history teaching and example, but as diseases that live and breathe under and within. above the surface of America.

Housed in the stately halls of Ancaster College, a prestigious Northeastern institution so exclusive it sits above Harvard (even FDR struggled to fit in), “Master” coats the current school the lingering air of the Salem witch trials. Centuries earlier, a woman named Margaret Millett had been hanged there for witchcraft. School folklore now says that each year her ghost chooses a freshman and, on the anniversary of her death at 3:33 a.m., takes the unlucky soul with her.

The main specter igniting old fears in “Master” isn’t totally what creaks at night. The racism runs so deep in both the school’s past and present that it has seeped into every brick and every portrait of a scary, pale-white college founder that adorns the walls. It’s the kind of place where the faces that populate the diversity package photos are the only eight people of color currently listed. Privileged whites who attend know they belong. The few blacks feel they have to prove their worth.

It’s into this predicament that Gail Bishop (Regina Hall), the college’s new – and first – Black Master, enters. The all-white tenured professors led her to essentially clean up their lack of diversity. Likewise, new freshman Jasmine (Zoe Renee), a bright young black girl and valedictorian of her high school class, stumbles upon the same pressures. Jasmine is assigned the dreaded room 302, with Amelia (Talia Ryder), a wealthy but troubled white girl as her roommate.

Gail and Jasmine face a series of microaggressions: they are compared by their white counterparts to Barack Obama, Beyonce, the Williams sisters. Diallo launches these gut shots, which the two women must endure without grimace, with the same dexterity as Jordan Peele with “Get Out”, during the annual Armitages meeting. It would, however, be a mistake to totally compare the two films. “Master” runs on a different, more open track: white men watch Jasmine as another exotic as she dances at a college party. When Chop Mui’s “Black AGAVE” blasts over the speakers, the white brothers dance exuberantly around a frightened Jasmine, and say every word, including the “n-word,” without hesitation.

Nothing is easy for Jasmine. Even Liv Beckman (Amber Gray), a black teacher who should be on her side, gives her an “F” on a Critical Race Theory article on “The Scarlet Letter” while giving her white classmates a passing grade. . Liv battles her fellow racists for tenure and is hyper-aware of how she feels like she doesn’t belong. Is Liv holding Jasmine to a higher, nearly unattainable black standard of excellence? Or are there more nefarious reasons for his strict expectations? An elastic gray always deliberately overplays his hand for a ruminating effect. The other beauty is Diallo’s patient and organic writing, which allows the viewer to turn over these seemingly disparate clues, each more innocuous than the next, until they reach their unpredictable ends.

In this painful film, Diallo asks: at what price should black people seek approval gatekeepers? Is the mental anguish that accompanies such ordeals worth it? At one point, Gail implores Jasmine not to give up. She explains how racism is the ghost that will never leave, how you can only be erased from this world if you surrender. It’s the kind of gritty philosophy that black women are often pressured into accepting if they want to succeed. But it’s advice Gail will soon learn doesn’t carry much weight against your own mental well-being.

There’s a similar rich agility in what initially appears to be an awkward merging of two ghost stories: the spirit of a black maid employed by a wealthy white family who once lived in Gail’s house haunts her, while that a mysterious white voice calls the house phone asking for a girl named “Elizabeth”. Diallo matches these fascinating threads with Jasmine’s own specters: recurring neon red nightmares of a dark hooded figure visiting the freshman, a noose mysteriously hangs outside his door, a burning cross appears and the memory of another black girl—who attended the school in 1965 as the first African-American student but ultimately died by suicide—consumes her. In the bowl of this crucible, the legend of the Salem Witch trials serves as a macguffin that Diallo sometimes over-teases.

A captivating Renee as Jasmine (she first broke out in Nijla Mumin’s sweet coming-of-age flick “Jinn”) imbues the scares with gravity, even when the film gets languid. Due to reliance on chapter titles, “Master” slows down, relying almost too often on its scares, which often recall Bernard Rose’s “Candyman,” in DP Charlotte Hornsby’s eerie, red-soaked compositions in a library. and a bathroom. The carefully constructed Diallo mythology in the film’s first act momentarily takes a back seat, causing friction between world-building and horror.

Thanks to Hall’s powerful in-house performance (the actress has rarely been better) and Diallo refining the contours of her dense, multi-dimensional storyline to interrogate race through horror, rather than fear being horror itself. , “Master” finds its place. Testimony of this filmmaker’s astute craftsmanship: the last twenty minutes, reminiscent of the “Shining”, loop in the macabre score of Robert Aiki Aubrey Lowe and reveal so many secrets involving colorism, passage, white paternalism, etc. ., one wonders how Diallo kept it all together without each frame collapsing in his hands. It’s just amazing. Detailed and deliberate, assertive but rarely obvious, Diallo’s “Master” is a towering and inventive shot in the arm of noir horror.

“Master” premiered at the 2022 Sundance Film Festival. Amazon Studios will release it later this year.

Register: Stay up to date with the latest film and TV news! Sign up for our email newsletters here.

Macau was once China’s ‘good kid’, but as Beijing revives its gambling industry, that could all change