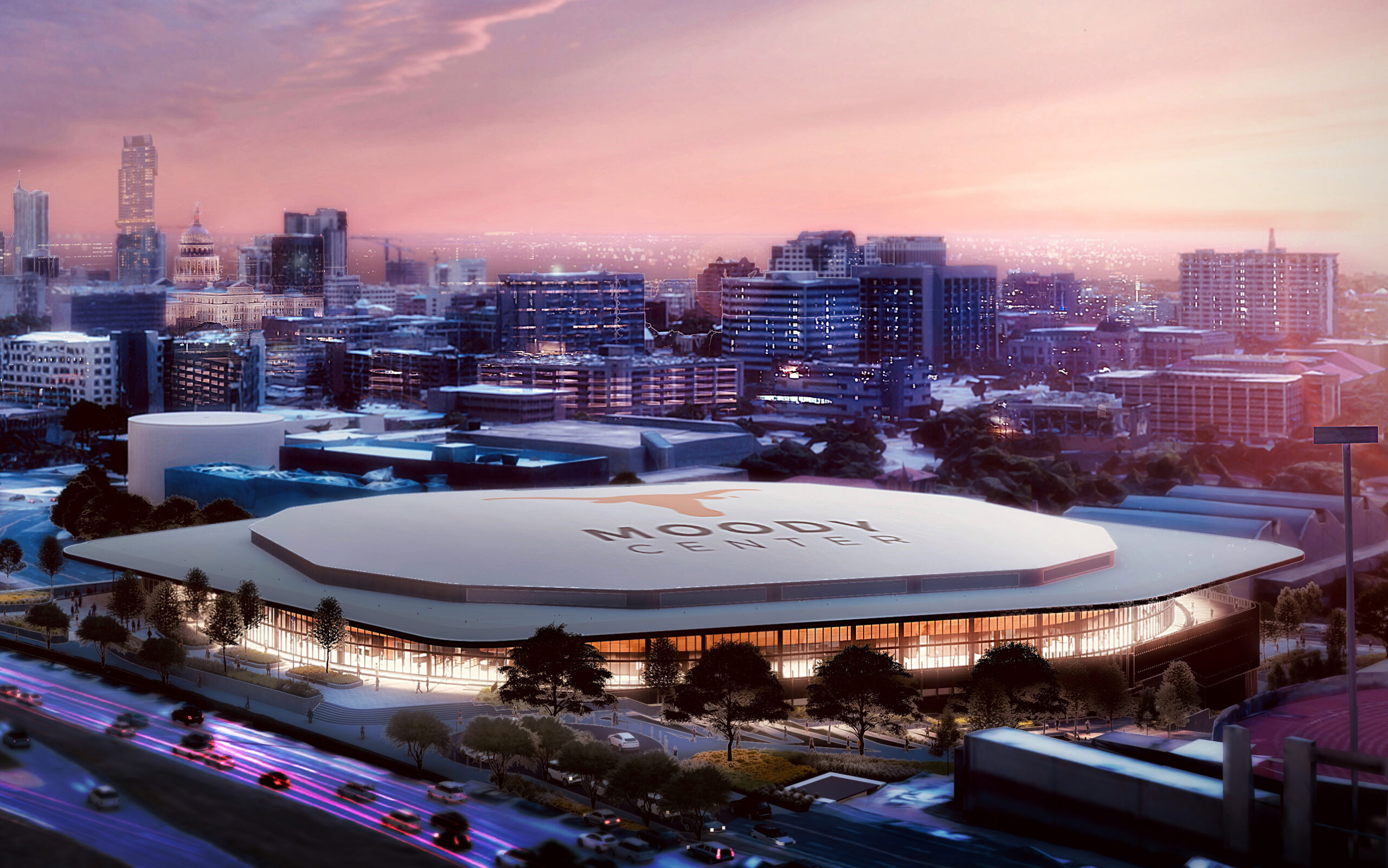 AUSTIN, Texas – The Moody Center, the multi-purpose, state-of-the-art venue located in the heart of downtown Austin on the campus of the University of Texas at Austin is now open. The Moody Center will host top international concert tours and musical performances featuring top artists, as well as popular sporting events including UT Austin women’s and men’s basketball games. The highly anticipated world-class arena will make its public debut on April 20, 2022, with the first concert by GRAMMY® Award-winning artist John Mayer. The venue is scheduled to officially open April 29-30, 2022. “Strait from Moody Center” presented by Bud Light will be a Texas-sized celebration featuring the unrivaled king of country music, George Strait with special guests Willie Nelson and his family and Randy Rogers Group. Both shows are sold out.

Developers for the $375 million project include Oak View Group (OVG), Live Nation Entertainment/C3 Presents, University of Texas at Austin and Matthew McConaughey. The arena is named Moody Center in honor of a $130 million grant from the Moody Foundation, one of the largest donations the University of Texas has ever received. From the impeccable acoustics of the 530,000 square foot arena to the fans’ intimate proximity to the performers, the 15,000-seat venue will fully immerse guests in an authentic Austin live music experience.

Drawing on Austin’s culture and community as core design concepts, the arena brings people together from the moment they walk in until the show ends. Built into the hillside, Moody Center offers 360-degree glass walls and ground-level entrances to every lobby in the building. More than 100 companies were used in the design and construction of the site and the estimated current value of subcontracts for Texas-based companies is $206,890,031.

Moody Center is surrounded by 200-year-old oak trees that were moved during construction and have since been replanted around Dell Technologies Plaza. The Dell Technologies Plaza will serve as a destination for fans hosting sponsor activations and pre-show entertainment on the Hulu Stage. Moody Center is a cashless venue with self-checkout concessions that will feature iconic Austin brands such as Stubb’s Bar-BQ, Tony C’s, and more. On the Self Concourse, full-service bars include Tito’s Handmade Vodka Bar, Hennessy 1765 Bar, and Milagro Tequila Bar. Around every corner, the Moody Center pays homage to Austin’s rich musical history with murals and neon lights by renowned local artists and a robust artist complex with 6 talent rooms named after venues. historic and iconic Austin music such as Broken Spoke and Continental Club.

Premium Spaces provide the ultimate fan experience at Moody Center. With over 44 suites, nearly 2,000 club seats, 3 premium clubs, 57 boxes and 1 super VIP club (Moët & Chandon Impérial Lounge), Moody Center will offer the ultimate and most premium way to experience a live event. Depending on seat location, club members will have exclusive access to elevated culinary offerings and private bars within the Dell Technologies Club, Indeed Club and Germania Insurance Club. Since March, suites and club memberships at the Moody Center have sold out; however, fans can join a waitlist for future premium experiences.

Following John Mayer’s two-night opening concerts, Moody Center will host a star-studded lineup of some of the biggest names in the music industry. Artists scheduled at Moody Center in 2022 include Bon Jovi, Justin Bieber, The Who, Dave Matthews Band, Eagles, Machine Gun Kelly, Andrea Bocelli, Florence + The Machine, James Taylor, Leon Bridges, Alan Jackson, Shawn Mendes, Daddy Yankees, and more. Full schedule at moodycenteratx.com/events. Jeff Nickler is the CEO of the Moody Center. Gensler is the Moody Center’s design partner, CAA ICON is the developer’s representative overseeing the design and construction on behalf of OVG, and AECOM Hunt is the general contractor. The official Moody Center app is now available for Apple and Android. For up-to-date information on upcoming shows, Moody Center news, and ticket access, be sure to turn on push and location notifications.