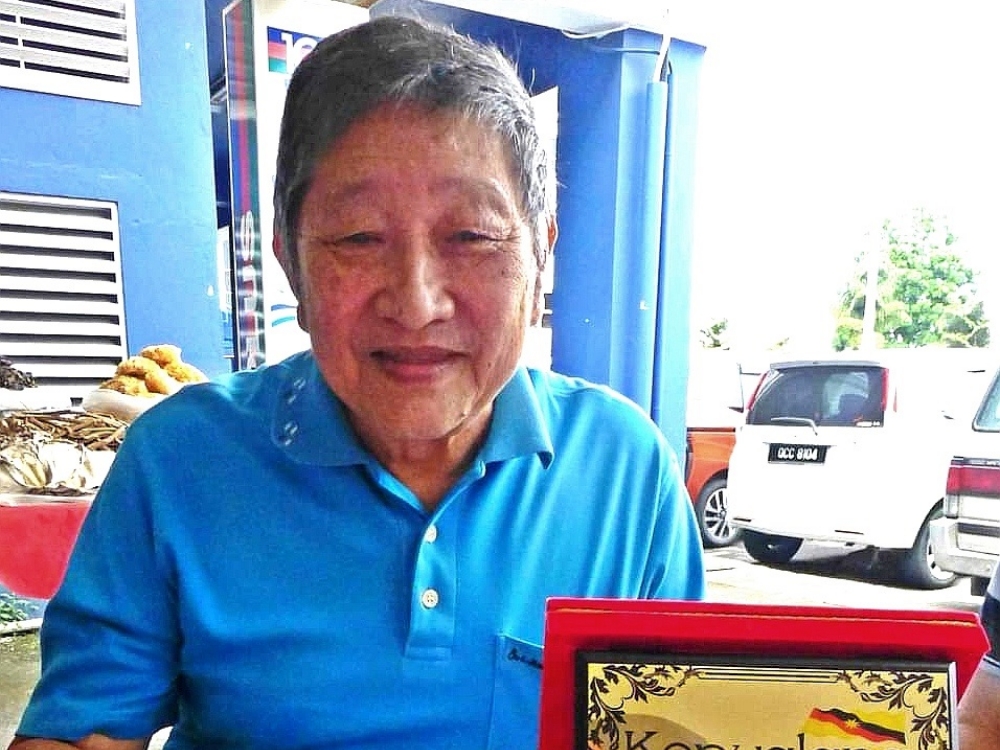 My days at The Vanguard with newspaper “godfather extraordinaire” Desmond Leong

Desmond Leong with his Golden Handshake Award by Kenyalang Press Awards in 2016.

The year was 1967. How many newspaper editors in the world would have given a 17-year-old aspiring journalist/writer an entire page of their broadsheet English newspaper, filling it with vibrant content to pique the interest of teenagers and young adults. on various entertainment topics – music, movies, books and hobbies?

Not just occasionally, but regularly and weekly?

Desmond Leong, then editor of The Vanguard newspaper, had invited me earlier that year to become a columnist for his English daily on a weekly basis – every Thursday I had to fill a full page (large format) with local and international articles of news, views, reviews and photos of subjects under the sun concerning the world of entertainment – under the name and pseudonym of ‘Pop Art’. (Yes – that was ME!)

My background up to this point had been writing and editing for my school periodical The Square and the annual Thomian magazine (at St Thomas Secondary School).

I had also self-published a newsletter called The Aron, a cyclostyled newsletter from the official Elvis Presley Malaysian Fan Club of which I was president from 1966 to 1970.

Earlier that year, my sister Edrea had taken up the pen of a column called “Teena’s Page” in the Sarawak Tribune, writing about the joys and anxieties of typical teenage feminist issues. It had been a huge success and I had suspected that the Tribune’s rival newspaper, The Vanguard, was looking for a similar column to counter it and give its readers “an alternative point of view.”

What a coincidence that it is that of a brother or a sister!

It had apparently worked because within a short time I was informed that our two columns were gaining popularity, especially among young people who had previously depended on what the various news agencies had produced – standard versions without no local input in these fields.

Leong family with patriarch Leong Ho Yuen seated in the center, (left to right) sons Raymond, Desmond and Richard, on the Sarawak Vanguard board in the 1960s.

Desmond Leong himself had started at a very young age, helping with his family journal; by the age of 17 he was already involved in many aspects of learning the trade. The father and patriarch of the family who founded The Vanguard was Leong Ho Yuen, who was the most politically active and had also been a co-founder of Sarawak’s first truly multiracial party called “Machinda” – named after the first syllable of three main breeds. : Malay, Chinese and Dayak.

Leong’s entire family was involved in the newspaper (and printing) business – all sons, Richard, Raymond and Desmond sat on the board of directors of The Sarawak Vanguard (1952-1974) along with the patriarch himself as president.

Desmond himself had started as a news photographer in 1957, at the age of 17, and six years later, in 1963, he had become its editor. A year later, in 1964, he had founded the English edition The Vanguard. I was only 14 then and my father started subscribing to The Vanguard because it was only the second daily in English after The Sarawak Tribune (which was considered the establishment newspaper – where all advertisements and all government views had prevailed).

The Vanguard had appealed to those who wanted a more independent voice – particularly Sarawak having merged with the Federated States of Malaya, Sabah and Singapore to become Malaysia in September 1963.

I was all 17, in class 5 at St Thomas Secondary School, studying for my Cambridge O Levels when Desmond gave me a job as a columnist in 1967. Every week, without fail, I was filling a whole page of great format of The Vanguard with news, views and reviews of pop, rock, jazz, folk music; on books and magazines; shows and concerts; and any other topic covered under “the arts and culture” of the day – for local and international.

I also covered interviews with visiting musicians, artists and shows, and was also a guest at a number of events and receptions.

By the end of 1969 I had completed my Cambridge A Levels exams and then joined The Vanguard as sub-editor and reporter from November of that year for four months until early March 1970, date on which I passed my interview with the Borneo Company. and had started working with them as an executive cadet on March 7, 1970.

My four full-time months with The Vanguard have been a real eye-opener! Up to that point in my life I could tell I had lived a pretty sheltered life like most teenagers had at that time (remember it was the 1960s) where the idea fun meant picnics at Santubong, Matang or Ranchan Pool. in serian; when screenings of great films like “The Sound of Music”, “Goldfinger” and “Cleopatra” put the city in turmoil; when fans lined up to buy Elvis and Cliff’s latest records; and carnivals with appearances from Rose Iwanaga, The Blue Rebels, Jimmy Kueh and Janice Wee were filled with pop fans!

One of the very first actual interviews Desmond had sent me to cover was a new show number at the popular Borneo Room at the Borneo Hotel, Tabuan Road – he was acclaimed as having an albino python live with a French showgirl on arrange !

I really got the shock of my life when the gorgeous French blonde appeared in the interview room totally naked with just a huge white python around her neck! I was there, along with my regular photographer, the “notorious” Cyrus Chong (who has become a good friend) and another reporter from the Chinese edition of The Sarawak Vanguard.

To say I was at a loss for words was an understatement!

But I think I submitted a pretty good interview for the next day’s edition. Oh yeah – I ended up finding out it was a pretty sexy strip show, as Hotel Borneo was then well known for such antics.

As a junior reporter I was sometimes sent to follow certain stories as they broke – it could be a nasty road accident, once it was a suicide, and then there were the regular political functions, company dinners and association anniversaries and other events.

Journalists would quickly reach a stage where the sight of “mass-produced” food would simply turn them off and how they would yearn for a simple bowl of porridge or just a quick burger.

Since those days, I truly sympathize with our newsgathering fraternity in the way they have been treated as well as the lack of esteem and concern due to them. I don’t think these attitudes have changed at all since the 1960s, and that goes back more than half a century!

However, I have also seen reporters and reporters receive their due – in the many awards and accolades bestowed on them; the respect and honor that many writers, journalists and editors have accumulated over the years. Most people do not realize that they are more than mere messengers, news gatherers and opinion makers; the very greatest reporters and editors can make a real difference across the world – in any field, at any time and at unexpected times and times – and many have changed the course of history.

Some of my heroes, besides Desmond Leong who is my forever “guru” of daily newspaper publishing, would include such famous names as Carl Bernstein and Bob Woodward whose 1974 book, All the President’s Men, brought down Richard Nixon. ; Christopher Hitchens; Ben Bradlee; Jann Wenner; Tina Brown; and a host of others.

Front page of The Vanguard, with exclusive headlines from May 14, 1969.

Desmond, my mentor, had started working in his family business The Sarawak Vanguard at the age of 17 in 1957 as a press photographer; in this capacity he had traveled the world throughout most of Europe and the United States; he even went to see Niagara Falls between the Canada and United States borders and had his photo taken at the White House.

He was friends with the most famous people, from “Bapa Malaysia”, the Tunku, to our Prime Minister Stephen Kalong Ningkan; to my other personal heroes like Datuk Amar James Wong and my uncle Tan Sri Ong Kee Hui…and other famous photographers like KF Wong and Ho Ah Chon too.

Although he wrote, edited, and reported on politics, he was never directly involved in politics himself, probably having personally seen how his father got away with “that dirty game”; although his own political leanings are well known.

He is a strong advocate for a truly independent and sovereign state of Sarawak; among his published writings is a book called ‘The White Rajahs – Myths Retold’, subtitled ‘The Massacre of the Bau Hakkas’ – his alternative revisionist history of the Brookes’ reign in Sarawak.

It is now out of print, but is considering a second edition.

Desmond turns 82 this year. He has retired from public life and lives happily in Kuching with his wife and family, and regularly takes to social media to express his views and share his experiences.

I wish him good luck – long life, peace, love and serenity, and I thank him for the many years of his mentorship, his advice and above all, for giving me my first chance to write for a public forum.
For that, I am eternally grateful.

Be safe, be well and may God continue to bless you, my “guru”!