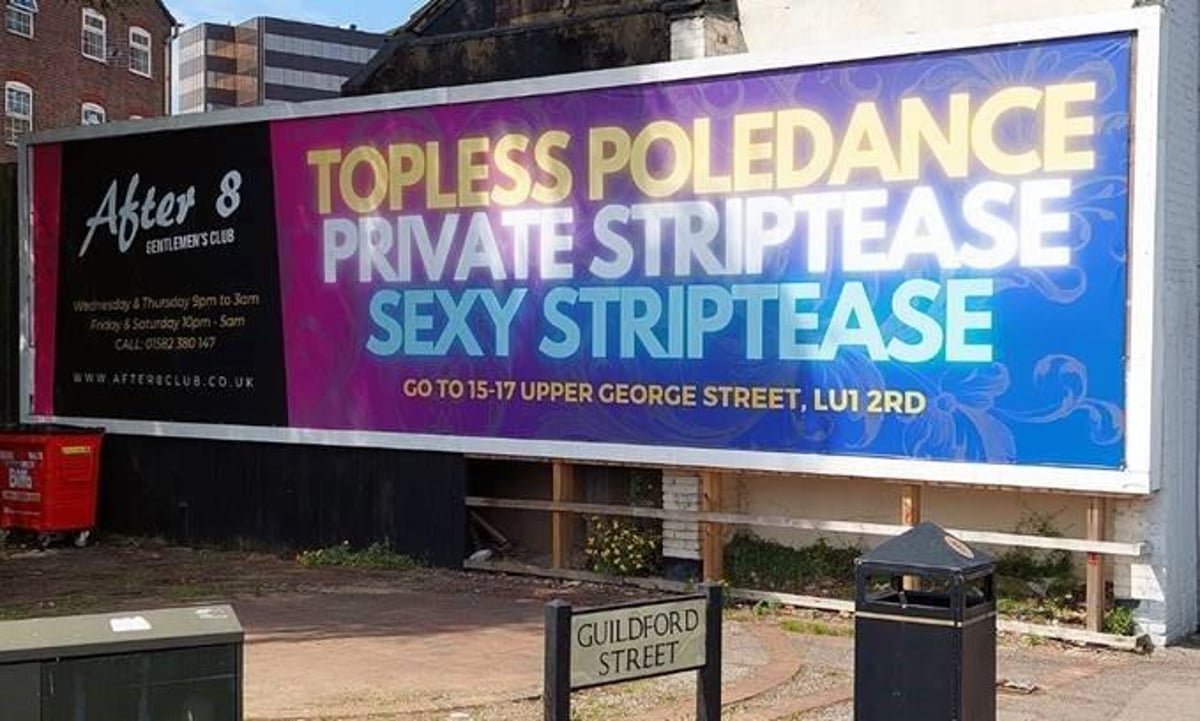 Petitions calling on Luton Council to take action over major adverts for a gentlemen’s club in the town have already reached over 600 signatures.

The appeal comes after action was sought for billboards for striptease and pole dancing at the After 8 Club on Upper George Street, which has set up at two locations on New Bedford Road and Guildford Street.

Owner of Italian restaurant Francesco Basile of Basile’s on Guildford Street said the sign was hurting his business.

The potests forced the posters to be changed – but a group that supports the city’s sex workers has started a petition asking the council to do more.

A spokesperson for Azalea said: “In recent weeks a number of posters advertising a local strip club have appeared in locations around town, and LAST (Luton Against Sex Trafficking) is working with the community to have them removed.”

Organizers of the change.org petition say, “We urgently need to remove them. These posters are inappropriate due to the language used, the services advertised and the locations where they are placed.

“This is urgent due to the potential for young girls at risk to see this and join the strip club/gentlemen. LAST wants to make Luton a place hostile to sex trafficking and sexual violence. How can we do this to us with such an advertisement placed all over the city?”

A paper petition also calls on the council to take action and review and change the policy so that “no such advertising can be made”.

John French, who raised the issues with the original After 8 posters, said the changes didn’t go far enough.

“They are a stain on the landscape,” he said. “Council have spent hundreds of thousands of pounds trying to turn Luton into a city of culture. They need to get rid of those billboards and put a mural on the wall. It’s the heart of the cultural quarter.

“You have to do something with the whole downtown area, everywhere you go there is a problem.”

A spokesman for Luton Council said it had agreed the signs were ‘a stain on our town’ and ‘completely unsuitable’ and had complained to the Advertising Standards Authority (ASA) and the owners of the signs. posting (Adnet).

The spokesperson said: “Adnet told us the advertising on New Bedford Road and Church Street was due to be removed with July 11.

“Unfortunately there is no direct action the council can take as the notice boards are private sites with planning consent and there is no breach of licensing or advertising regulations.

“Although the club is a legitimate licensed business and has the right to advertise, we believe there are more appropriate ways to reach their target audience without having them in such prominent places where they will be seen by children.

“We are once again calling on the club and site owners to rethink their advertising strategy given the impact it has on the wider community.

A spokesperson for Adnet Marketing said: ‘After 8 Club and Luton Borough Council are our customers so all parties are working together to remedy this.

After 8 Club told the BBC: “We are also a local business and we all need all the support we can get and will update our poster accordingly as we all need to work together.”