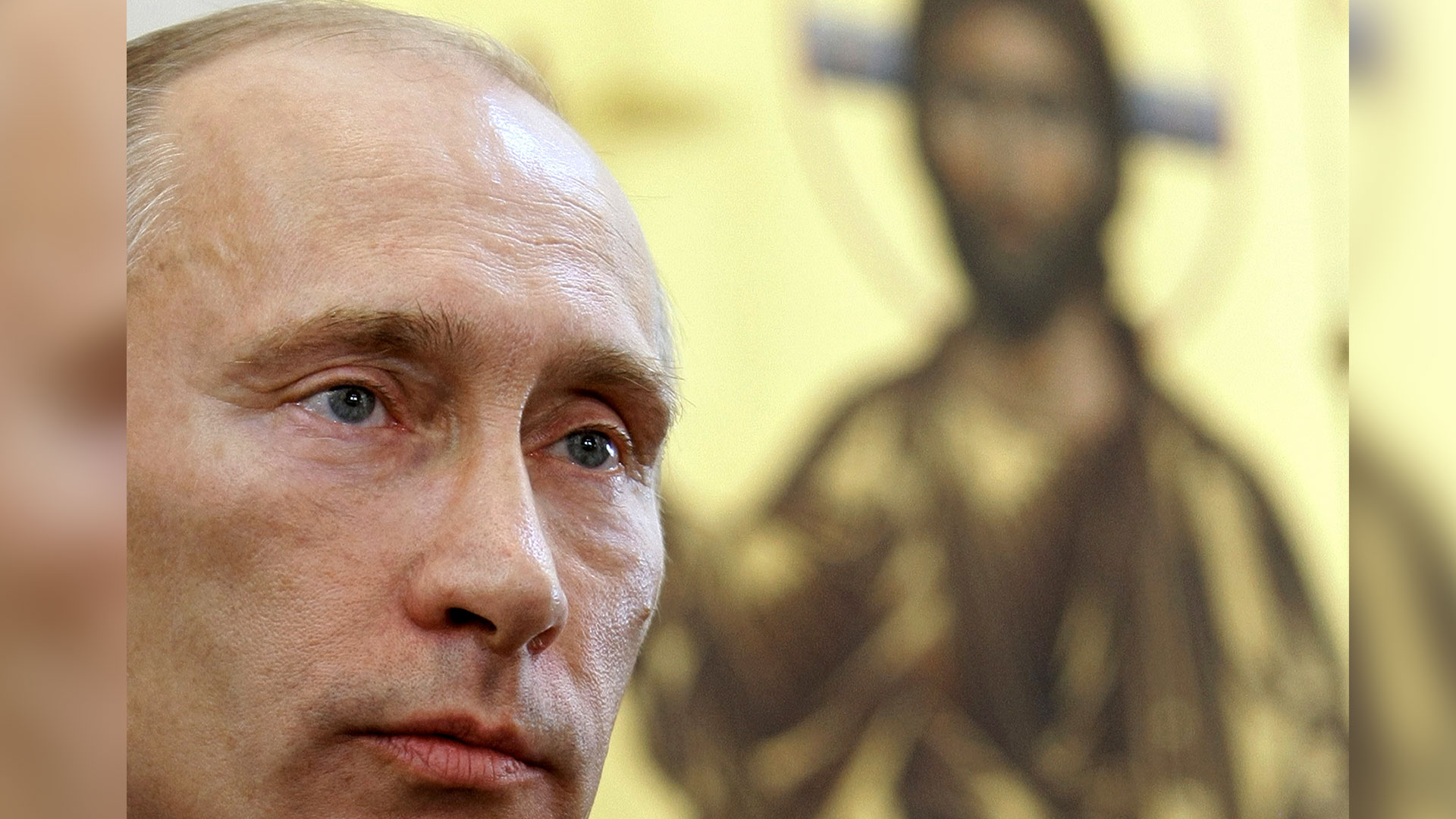 Putin sees Ukraine as part of Russia’s ‘spiritual space’, and some say he’s a ‘messianic figure’

What does Russian President Vladimir Putin think of God? It’s a fascinating question that the world cannot answer “with certainty”, according to Mark Tooley, president of The Institute on Religion and Democracy.

After all, there is a difference between what Putin says and what he does – and there is strangely a lot of uncertainty and confusion intermingled between the two.

“He had a devout Christian mother and wore a crucifix around his neck for most of his life,” Tooley told Faithwire. “Certainly he embraced the patronage of the Russian Orthodox Church and used it to advance his own political goals nationally and internationally, but that is an age-old tradition for Russia.”

Tooley explained that Russian orthodoxy, to the outside world, might appear to position Putin’s country as being in complete alignment with Western religious ideals, although fundamental differences between cultures reveal deep incompatibilities.

The Russian brand of Christianity

Rather than spiritual compatriots, the Christian faith seen in many Western countries is radically different from the Russian interpretation of self-proclaimed, government-aligned religiosity.

Watch Tooley explain what Putin could believe, Russia’s religious background, and why Ukraine is in the crosshairs:

“Russia has been a longtime enemy of the West precisely because of its version of Christianity,” Tooley said. recently wrote in an article in World Magazine. “For centuries, Russian Orthodoxy has considered itself the guardian of the true faith, unlike Western Catholicism and Protestantism. Moscow, according to this tradition, is the third Rome, the seat of true Christianity, after Constantinople and the Roman Empire.

Tooley argued that this ideology permeated even the Soviet Union, despite its anti-religious bent, and colored certain aspects of how Russia views Ukraine today.

The specialist in religions affirmed, “Russian Orthodoxy has almost always been a cheerleader nationalist subordinate to the state.” Despite Russia’s penchant for state-sponsored religion, he thinks the nation “is more secular than many Western countries,” which might surprise some.

Despite the Soviet Union’s initial attempts to kill religion, its political utility was eventually recognized, Tooley said. And today, it persists.

Putin considers himself a ‘messianic figure’

With all of this in mind, it’s easy to see why Putin and the state are so interested in religion, especially as it relates to Ukraine. BBC’s Harry Farley recently said Putin sees himself as a “messianic figure, a savior, to unite the Eastern Orthodox churches under Moscow”.

The theological circumstances in Ukraine and Russia become increasingly worrying when one considers that the Orthodox Church in Ukraine achieved autonomy just three years ago, freeing itself from Russian control.

Although part of the Orthodox Church in Ukraine still recognizes Russian authority, the schism has grown.

“The Orthodox Church of Ukraine, just three years ago, gained autonomy and its chief bishop was recognized by the Patriarch of Constantinople as having his own separate authority, no longer subordinate to the Patriarch of Moscow,” Tooley explained. “Which, obviously, the Russian Church and the Russian State did not like.

There is a complex history surrounding these issues, but historian Katherine Kelaidis explained that the Patriarch of Constantinople, who claimed leadership of Orthodoxy, is more aligned with the West, while the Patriarch of Moscow, who heads the Russian Church, has a more traditional position, as well as other distinctions.

Regardless of the intricacies of history, know this: the decision of the Ukrainian Church to split in 2018 was considered “historic”. At the time, former Ukrainian President Petro Poroshenko welcomed the decision.

“This day will go down in history as a holy day…the day of the final independence of Russia,” he said.

It is unclear what would happen if Russia took full control of Ukraine. However, it is possible, even probable, that the Russian Orthodox Church will try to regain control of its Ukrainian counterpart.

Putin has repeatedly made it clear that he sees Ukraine and Russia as sharing “spiritual space”. Thus, this question has probably not left the mind of the radical leader.

“Ukraine is not just a neighboring country for us,” he said. recently said. “It is an inalienable part of our own history, culture and spiritual space.”

Now, let’s reconsider how these relationships and Putin’s lust for control over the Ukrainian people mesh with his personal religious practices. Farley offered a compelling recap, illuminating Putin’s perspective.

“Moscow and the Russian Orthodox Church grew, became this immense power… within the Orthodox Church. But in 2019, the Ukrainian Orthodox Church separated from Russia and was recognized as independent,” he added. noted. “Religion is extremely important for Putin’s identity, for his psyche. He immerses himself in icy water on the occasion of the Epiphany feast, he carries his baptismal cross.

What does Putin really believe?

This brings us back to our original question: what does Putin believe about God? Again, it’s not clear.

Although he has spoken on religious and spiritual matters – and participated in religious rituals – the Russian leader has sometimes been negligent to say what he specifically believes. In fact he was sadly ambiguous about it in a 2007 Time Magazine interview.

The outlet told Putin that many Americans view Russia as an “ungodly country.” Highlighting how Putin often discussed faith, Time then asked, “What role does faith play in your own leadership, and what role should faith play in government and in the public sphere?” The Russian leader’s response was measured.

“First and foremost, we should be governed by common sense, but common sense should first be based on moral principles,” he said. noted. “And it is not possible today to separate morality from religious values. I won’t elaborate, because I don’t want to impose my opinions on people who have different points of view.

In a follow-up question, Putin was asked if he believed in a “Supreme God,” and he replied, “Do you? He later declined to share his specific beliefs on the matter.

“There are things that I believe should not, in my position at least, be shared with the general public for everyone’s consumption, because it would look like self-publicity or a strip -political tease,” he said.

The mysteries surrounding Putin persist as his brutal invasion of Ukraine continues. Although the internal motives and beliefs may not be obvious, understanding the Orthodox divide provides insight into a fragment of the overall battle.

***As the number of voices facing big tech censorship continues to grow, please subscribe to Faithwire Daily Newsletter and download the CBN News app, to stay up to date with the latest news from a distinctly Christian perspective.***