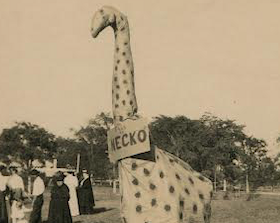 Over the past two years, many of us have found new ways to entertain ourselves. We spent more time doing outdoor sports (even in winter), hiking, sitting around fire pits and watching movies in the garden.

Many of these activities were reinforced by the need to get away from the screens that dominated our work and school lives. We also got creative with car parades to highlight important events.

Long before television and the Internet, Rochester residents in the 1900s offered a wide variety of ways to entertain themselves and their community. There were clubs, including men’s, women’s, 4H and municipal sports teams.

Suppers and picnics at church, plays and variety shows presented at Grange Hall, and dances (apparently every weekend) throughout the area provided plenty of entertainment.

However, in 1909, a Rochester resident, Mary Holmes, had a novel idea. She began to promote and organize a municipal circus.

Now, in the recent past, we had a circus tent set up on land in Plumb Corner which is now part of the new condo community being built, but Holmes’ Circus was quite different.

On August 11, 1909, there was a circus parade around the Town Green led by the master of ceremonies, Richard Stiles. He was the great-grandson of Rufus Savery, who had lived in what was thought to be the oldest house in Rochester. The house was later demolished and moved to Bourne.

The parade featured music wagons, townspeople dressed in interesting costumes, and a collection of exotic “animals.”

A Roman chariot was driven by LC Humphrey’s daughter, Helen, dressed in appropriate costume. His chariot was made from the wheel arch of his father’s old mower, a post platform, and a piece of old metal fashioned to form the front.

Tobey and Reuben, Humphrey’s black horse team, pulled the chariot. Joseph Bradford also drove a team of horses, pulling a wagon in which he sat on a high seat, dressed in a borrowed suit and a silk top hat.

“Exotic” animals included “Necko”, the giraffe. Necko was made of fabric and was moved by two boys hidden inside. A boy was holding a long pole to support the giraffe’s head and neck.

Mary Holmes, the initiator of the circus, rode her big black mare transformed into an elephant. The horse must have been very calm and patient as she was draped in gray fabric and had an elephant’s head, with tusks and a trunk that looked incredibly realistic.

It was led by Maynard West dressed as a Turk with a cape, baggy pants and a sabre. Marion Nevius walked dressed as the Queen of Sheba.

Perhaps the favorite of the kids watching the parade was Flora Chase, who rode inside the “monkey cage.” Besides acting like a monkey, she also had handouts for children. His antics caused a stir.

On the Green, there was an “Indian” camp with a large teepee (an Amerindian dwelling that would never have been found in the region) and school children in costume.

And of course, stalls sold food and drink, adding to the enjoyment of those attending Rochester’s one and only circus.

It wasn’t about modest dress

Design/construction team selected for the amphitheater