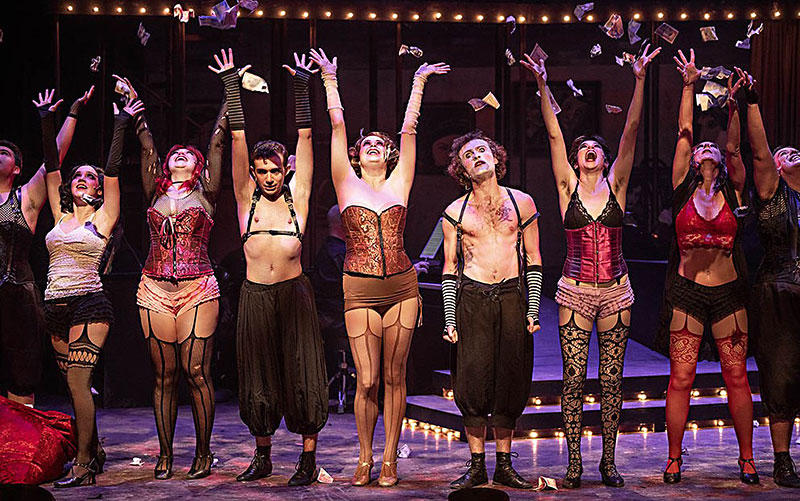 The iconic musical Cabaretcurrently staged by the Georgetown Palace Theatre, takes us to the Kit Kat Klub in late 1920s Berlin as the Nazi Party rises to power and the tragic life of nightclub singer Sally Bowles unravels dramatic.

CabaretThe popularity and continued relevance of has resulted in numerous revivals since its premiere on Broadway in 1966 and in London in 1968, which inspired the 1972 film starring Liza Minnelli as the overly theatrical role of Sally Bowles and Joel Gray as the mischievous, androgynous and androgynous of the nightclub. Sardonic master of ceremonies. Joe Masteroff’s poignant adaptation of John Van Druten’s 1951 play I am a camera (itself an adaptation of Christopher Isherwood’s novel Goodbye to Berlin), John Kander’s memorable music and Fred Ebb’s powerful lyrics have remained intact, but each subsequent performance has refined the original director’s creative vision. None were as dramatic, dark and decadent as the 1993 staging at the Donmar Warehouse in London’s West End. Its decidedly seedy and austere set design underscored the depravity of the era and complemented the seismic shifts in character portrayal. The redesigned emcee was sexually charged and dangerously seductive. The burlesque troupe known as the Kit Kat Girls, bored and weary in the original production, looked like they were ridden hard and put away wet in the revision, and their performances were deliberately emptied of whatever little flippancy they possessed. previously. And Sally went from lost to broken, spitting out the lyrics to the title track – “Start by admitting / From the cradle to the grave / Isn’t a stay so long / Life is a cabaret, old friend / Nothing but a cabaret, old friend / And I like a cabaret– as if it were a desperate plea for help.

And so performance venues like the Georgetown Palace Theater have options when they bring their Cabaret to the stage: the quirky, thought-provoking yet safe and undeniably entertaining rendition, or the more disturbing and thought-provoking version. Director Emily Taylor and her designers – Evelyn Joy Hoelscher (choreography), Faith Castaneda (lighting and costumes), Steve Williams (stage) and Justin Anderson (sound) – went with Gate No. 3 – a composite production founded in large part on the benign aspects of the original but inspired by the more risque and risque elements found in the 1993 revival.

Changes in lighting and the introduction of some furniture establish the apartment where Sally (a genuinely likeable Kris Glorioso, whose fine comedy covers a dodgy voice), lives with the naive, newly arrived and unsuccessful American novelist Cliff Bradshaw (a lukewarm David Dech). It also establishes the hallway where elderly boarding house owner Fräulein Schneider and her Jewish suitor Herr Schultz (a charming BJ Ortwein and Jerry Brown) exchange unhappy flirtations, and the place where Nazi sympathizers – among them the hard-hearted prostitute Fräulein Kost and the affable businessman Ernest Ludwig (a powerful Olivia Christie and Jake Maspero) – show their true colors first.

All this will soothe Cabaret traditionalists. For the rest of us, we’ll find our pleasure in Dawson MacLeod’s remarkably unsettling and off-the-beaten-track portrayal of the emcee. The fake smile and terrified eyes reveal the character’s internal turbulence as Berlin shifts from the epicenter of avant-garde culture to a state of totalitarianism. MacLeod is willing to sacrifice humor for pathos and amusement opportunities for awkward moments. And the character goes from dark to dark as the Nazi regime takes over the homeland.

While the sardonic version of the animator fits right into the world of the original production and the people who populated it, and the seductive revival animator did the same, the MacLeod animator is an outsider. in the world created for this production, as he is the only one in the room feeling the weight of the infiltration of fascism. Well, him and us. And that’s what makes the Georgetown Palace Theater’s merged production so intriguing.