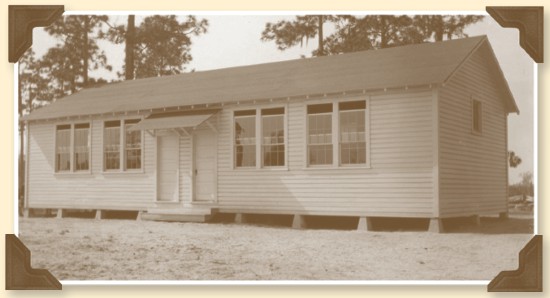 A group from the Okahumpka community in central Florida wants to save this building, once one of more than 5,000 Rosenwald schools, named after Jewish businessman Julius Rosenwald. Schools were a lifeline for black children in the South at the turn of the 20th century.

When Jewish businessman and philanthropist Julius Rosenwald, president of Sears Roebuck & Co., visited his friend Booker T. Washington at the Tuskegee Institute in 1912, the state of black children’s education in the Jim Crow South was a disaster.

At this meeting, the men drew up a plan to build state-of-the-art schools for black children.

It started as a pilot project in Alabama, but eventually spread to 15 southern states. Rosenwald provided significant funding for the project, which resulted in more than 5,000 “Rosenwald schools” for black students, including 12 in Florida.

Today, a group from a small Florida community is trying to preserve one of the few surviving Rosenwald School buildings and honor its benefactor.

“At the time of his death in 1932, the schools Rosenwald built were educating 35% of all black students in the southern United States and 27% of black American children as a whole,” notes the Philanthropy Roundtable website. 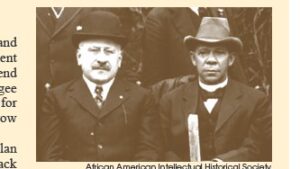 The National Trust for Historic Preservation adds, “The effort has been called the most significant initiative to advance black education in the early part of the 20th century. “

Following the implementation of the Brown v. Board of Education for desegregating schools, Rosenwald schools have become obsolete and many have been abandoned, demolished or transferred to private hands.

“Despite the historical importance of schools, only a small percentage of Americans know about structures and their impact on the history of our country. While some schools are preserved for community use, lack of resources and neglect threaten many more, ”says the National Trust for Historic Preservation, including Rosenwald schools on its list of the 11 most endangered historic places. .

Rosenwald was a firm believer in buy-in from those he aimed to help and often used the “matching fund” model of giving, pledging funds to be paid by recipients. In the case of schools, notes the Philanthropy Roundtable, skeptics believed poor blacks could never find sufficient funds. But their desire to educate their children was strong, with families providing land, materials, labor, and money to meet subsidy requirements.

The Rosenwald school building in its current state.

The website cites another benefit of his plan: “He astutely maneuvered local and state governments to participate, overcoming their historic rejection of black education with the allure of outside manna. “

Most of the buildings, one- and two-grade schools on country roads, were a source of great pride for their community. One of the few rural Rosenwald schools still standing is located in Okahumpka, an unincorporated area with a population of around 200 located about 75 miles northeast of Tampa.

The nonprofit Okahumpka Community Club owns the building and has started a $ 75,000 GoFundMe project (gofundme.com/e/restoration-of-the-okahumpka-rosenwald-school) to renovate the building and help preserve the history of this era. At the time of going to press, the online fundraising effort has raised $ 500, but the official launch of the campaign is scheduled for November 5 at the school.

A state grant was opened earlier this month and letters of support for the community club’s efforts have already been written by the Lake County Commission, the Jewish American Society for Historic Preservation and Gilbert King, who won a Pulitzer Prize for Non-Fiction for his book, “Devil in the Grove”, about a rape case in Lake County in the 1940s.

Chip D’Amico, chairman of fundraising for the Okahumpka Community Club, said the group intended to use the building as a community center and to honor Rosenwald as well as the late Florida civil rights lawyer. Virgil D. Hawkins, whose family provided half an acre of land for the school. Hawkins is known to have fought the legal battles from 1949 to 1958 that ultimately broke up the University of Florida.

“We want to completely restore the old school to its original state when it was new. And we need to add a new building attached to the school to provide mandatory Americans with Disabilities Act (ADA) bathrooms, meeting space for visiting groups, school classes, etc., and make the addition available. as an emergency shelter for the area, as well as a community center, ”D’Amico said.

The Okahumpka School had two classrooms and was a wood frame structure completed in 1930 at a cost of $ 3,320. It is typical of the many small rural schools in Rosenwald. D’Amico said it referred to the Colored or Negro school in Jim Crow’s time.

In recognition of Rosenwald’s philanthropy, the American Jewish Society for Historical Preservation and its president Jerry Klinger have already funded and provided a historical marker for the Okahumpka Rosenwald School, D’Amico says. “We plan to install [the marker] In the coming months.”

Additionally, the Florida Trust for Historic Preservation recently placed the Okahumpka Rosenwald School in its 2021 “11-to-Save” initiative, recognizing the historic significance of the building and the Division of Historic Resources of the Florida Department of State requests. at the national park The service places the school building on the national historic register.

Another initiative involving schools is the Julius Rosenwald and Rosenwald Schools National Historic Park Project. It would have a visitor center in Chicago and would include some of the southern schools designated as part of the national park system.

Of the 25 listed in Florida as still standing, the state has been authorized to nominate five buildings to the National Historic Park Organization. They include those in Bradfordville in Leon County, which is currently used as a private resident, and another in Cocoa, which was a four-teacher masonry building. The other three are in Tallahassee, Gainesville and Fort Myers, all large masonry buildings, accommodating 10 to 17 teachers, and still in use as schools today.

The Okahumpka school placed eighth and is currently not being considered for the national park. However, it was cited as “Florida’s best example of a two-teacher wood-frame school.” Those who rated it noted that it did not rank higher because it is in a relatively remote area and “would need a thorough restoration.” D’Amico maintains that the structure is very sound and that the restoration would not be a major undertaking.

The Philanthropy Roundtable, whose vision is to “build and sustain a vibrant American philanthropic movement,” says in current dollars, during Rosenwald’s lifetime he donated just under $ 2 billion in funding to various charitable causes . In addition to the Rosenwald Schools Project, the website says it single-handedly funded the Chicago Museum of Science and Industry and donated millions to Jewish interests, including saving thousands of victims of the russian revolution. It generously supported black colleges, funded the construction of 22 YMCA / YWCA community centers and urban dormitories for blacks during the segregation era, and funded one-third of the court costs in the Brown v. Board of Education.

Rosenwald was born in Springfield, Illinois in 1862 to parents who fled poverty and anti-Semitism in Germany. As a child, he learned the clothing business, working weekends in his father’s store and the principles of Judaism with other children from the small Reformed congregation in town. He left home without graduating from high school in favor of an apprenticeship with successful uncles in New York. In 1885 Rosenwald moved to Chicago and, with his brother and a cousin, established a business manufacturing men’s clothing. Ten years later, when offered the opportunity to buy a small, unknown mail-order business called Sears, Roebuck & Co., he instantly decided it was a business of future, and he was right. By the time he was in his mid-forties, Rosenwald was several times a millionaire.

As a newly wealthy man, Rosenwald approached with determination the responsibility he felt to constructively share a portion of his phenomenal fortune. In his synagogue, the Sinai Congregation in Chicago, Rosenwald was attentive to Emil Hirsch, a nationally recognized promoter of faith-based social activism – what Christians called the social gospel. It was Hirsch who introduced Rosenwald to Jane Addams and encouraged her to support her work with newly arrived immigrants. The annual gifts to Addams Hull-House social settlement were among his earliest contributions. [Addams went on to be the first American woman to win the Nobel Peace Prize.]

When a friend gave him a copy of “Up From Slavery”. Booker T. Washington’s powerful memoir of his childhood in slavery and his adult life as the founder and director of the Tuskegee Institute in Alabama, Rosenwald paid particular attention to this. He had been struck by parallels between violence against Jews in Europe and a major race riot in 1908 in his hometown of Springfield. So when the opportunity arose for him to meet Washington, Julius Rosenwald eagerly agreed.

The rest, as they say, is history.