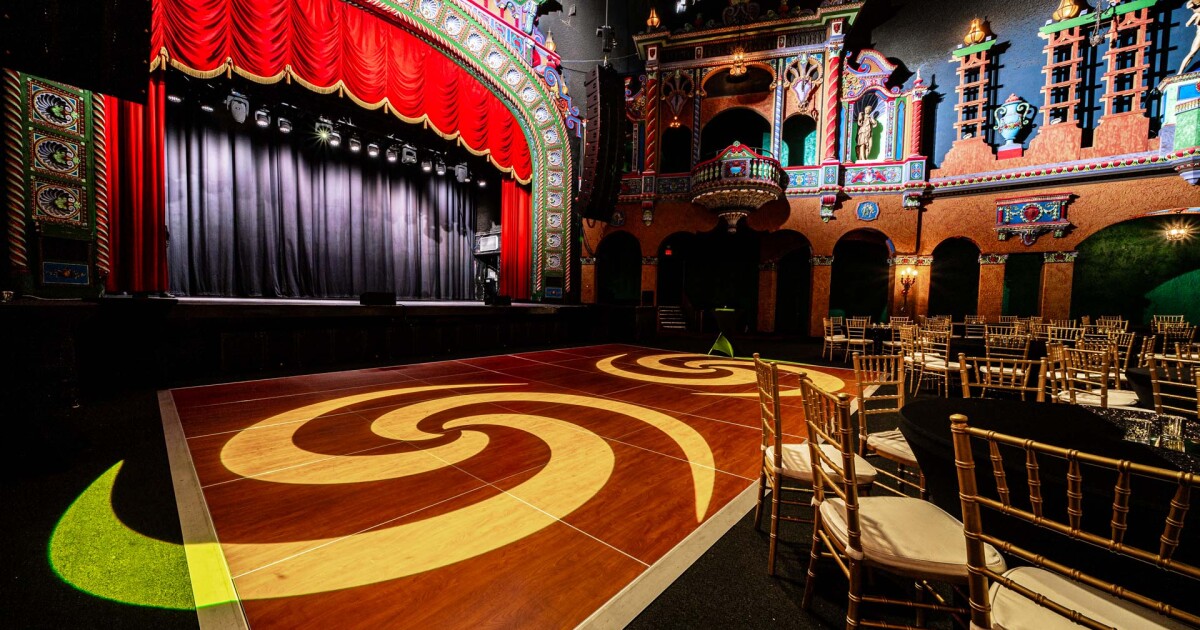 Take a Tour of Historic Kansas City Theaters, Dating Back Over a Century | KCUR 89.3

This story was first published in KCUR’s Creative Adventure newsletter. You can sign up to get stories like this delivered to your inbox every Tuesday.

One thing is certain: we are lucky to live in a city that is full of architectural excellence and history. With concerts and return tours to Kansas City theaters, we’re looking back at the history of some of our favorite local venues.

Kansas City’s oldest theater dates back to 1900 and once hosted vaudeville and burlesque acts. Another classic Kansas City theater was rumored to have had “an elevator big enough and powerful enough to carry elephants onto the stage.”

Whether you’re there to see a movie or your favorite musician, we think you’ll leave Kansas City’s iconic theaters with a story to tell, too.

Kansas City’s oldest theater seems like a good place to start. If you’ve ever walked east on 12th Street toward Power and Light, you’ve probably spotted the iconic Folly sign shining brightly in one corner of the Palladian style building.

Built in 1900 to host burlesque and vaudeville acts, Madness Theater was originally called the standard theatre. In 1902, renamed the Century, the theater announced boxing matches on stage. In 1920, there was a balcony fire, “but the show went on that night with sawdust on the floor,” according to Folly’s website.

When the famed Shubert Brothers of New York purchased the Folly in 1923, they named it Shubert’s Missouri and brought Shakespeare’s plays to Kansas City. However, as businesses closed in the 1930s, the Folly booked fewer shows. It reopened in 1941 as a strip club but was soon demolished.

Luckily, the folly was saved from the parking lot disaster by city leaders Joan Kent Dillon and William Deramus III, who secured its place on the National Register of Historic Places. The renovated venue reopened in 1981, even hosting former President Barack Obama in 2010.

Located in Kansas City’s historic 18th & Vine Arts District, the Gem Theater is aptly named. Built in 1912 as a “palace of silent cinema”, the structure was originally called Star Theater.

Over the years, the Gem’s silent projections have evolved into “talkies,” as they were called, but the mission has remained the same: to provide an entertainment space for Kansas City’s black community.

This goal became particularly important in the 1980s when Mayor Richard Berkley and then Alderman Emanuel Cleaver agreed to renovate the Gem and underline the grandeur of 18th & Vine. Learn about recent redevelopment efforts in KCUR’s 18th and Vine District from Carlos Moreno.

Today, you can listen to live music at the 500-seat performing arts center, and take part in theater productions and community events.

Completed in 1921 as Mainstreet Missouri, the Main Street Theater was once a vaudeville hall. His exterior blends Neoclassical and Second French Empire fashions. The term “neoclassical” is vague – it translates to less extravagant and built with the intention of serving a purpose.

In contrast, the French Second Empire style is very eclectic, with maximalist elements and low, square-based domes like the one seen in Mainstreet today. Even the most disparate schools of thought can come together in ways that offer a fresh perspective.

According to a Kansas City Times article beginning in 1987, a tunnel was built to route actors from the theater to their dressing rooms, connecting Mainstreet to the President Hotel. Like many tunnel passages under historical monuments in Kansas City, the alleged Mainstreet sub was allegedly used by bootleggers during Prohibition.

The same article mentions Mainstreet’s basement, which may have had an “elephant cage, seal pool, and an elevator large and powerful enough to carry the elephants onto the stage.”

South of Midtown, the Madrid Theater opened in 1926 as Spanish Revival Style silent film house. This style is inspired by the Mediterranean Revival style, which uses Latin American components such as red tiled roofs, terracotta and asymmetry.

Outside of the Country Club Squarethe Spanish Revival style is rarely seen in Kansas City, which makes Madrid stand out even more.

Once a storage warehouse in the 1950s, the theater was purchased by craftsman Victor Patti in 1983 and used as a carpentry workshop. In 1995 – after it had been practically emptied – investors became interested in the building and it was renovated.

Currently, Madrid hosts weddings, concerts, fundraisers and the occasional salsa party. Schedule a visit if you want to check out the event space.

Now known as Arvest Bank Theater in MidlandKansas City institution was built in 1927 in the Renaissance neo-Renaissance style. This style is similar to Italian and considered by some to belong to the same architectural category.

The Midland was called Loew’s Midland Theater and the Saxon Theatre. At the time of construction, it was the largest theater within 250 miles of Kansas City. It housed a pipe organ which was played during stage shows until the film took off after World War II.

Rounding out our list, another Midtown gem: the downtown theater. Built in 1928 in Italian Renaissance Style, the Uptown Theater was – and is – a rare bird. It was known as Missouri’s first “atmospheric” theater.

The theatre’s website then mentions appearances by movie stars like Shirley Temple and Roy Rogers, and – in keeping with general lavishness – Uptown began producing something called “fragratone” in 1939. This meant the theater would fill with ‘a perfume, “to add olfactory pleasure to the entertainment experience.”

Until the 1960s, the theater mixed vaudeville and stage productions with cinema. The Lyric Opera Company found residence in its halls in the 1970s, and eventually the theater became known as a concert hall.

Although Uptown temporarily closed in 1989, it was renovated in the 1990s at a cost of $15 million. Waiting in line to attend a concert is a rite of passage in Kansas City.

SWINGIN’ WITH MUSIC BY STEPHEN SONDHEIM at Feinstein’s/54 below