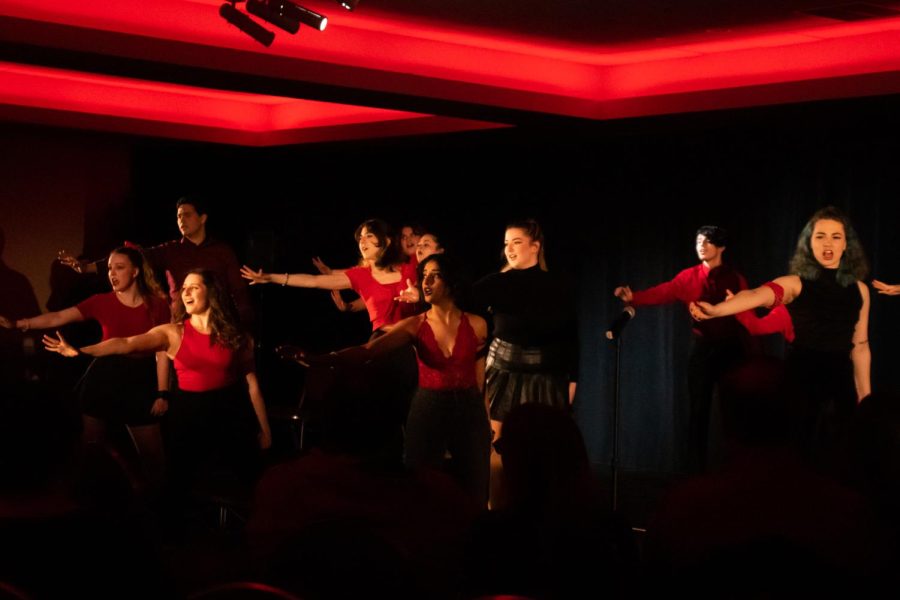 It may have been April Fool’s Day, but Suffolk University’s Rampage Show Choir was no joke.

Rampage and Fusion Dhamaka, Suffolk’s Bollywood fusion dance crew, hosted Love Always, Rampage, a cabaret show, at Sargent Hall on Friday. Audiences were invited to participate in raffles and snack on cupcakes during the performance.

After the house lights were turned off, the members of Rampage performed solos, duets and trios ranging from 1970s disco to modern Broadway ballads. The hosts, Fusion Dhamaka Co-Chair Akhila John, Co-Chair Amy Ramsepaul and Secretary Riya Kamani told jokes and entertained the audience between each act.

John highlighted the talent of the members of Rampage and the hard work the band put into their performance.

“My favorite part [of the show] was the band’s performance, I could tell they worked very hard this year. Their performance was amazing,” John said.

Isa Blanco and Lily Grazioso, both freshmen, opened the show with “No More Tears (Enough is Enough)”, originally sung by Barbara Streisand and Donna Summer.

Although the song started off slow, Blanco and Grazioso’s clean tone and on-stage chemistry captivated the audience from the first second. As the song progressed and the music became more upbeat, their voices shone together and alone.

Blanco then returned to the stage for a solo, where they performed “Kindergarten Boyfriend” from the musical “Heathers.” The ballad featured Blanco’s upper register and incredible vocal control. Their performance made singing a difficult song as easy as breathing air.

Rampage senior and vice president Molly Ellis sang Ingrid Michaelson’s “The Way I Am” for her solo. Ellis’ bright tone was perfect for the folksy tune and seemed to put a blanket of calm on the audience.

Freshman Charlotte Cartelli then performed a stunning rendition of “When He Sees Me” from the musical “Waitress.”

The song, sung by Dawn in the musical, tells of her misfortunes and apprehension about dating. Cartelli’s voice and acting embodied the character of Dawn and allowed her to deliver an incredible performance.

Cartelli and Grazioso joined Rampage president Morgan Mitcheson, a junior, for a trio of “Flying Away” from the musical “Fun Home.” Cartelli, Grazioso, and Mitcheson all portrayed the main character, Allison Bechdel, at different ages, recounting her relationship with her father through song.

The trio’s voices blended beautifully, coming together with beautiful harmony and tone.

Grazioso spoke highly of Rampage’s ability to balance a strong work ethic with having fun.

“We all worked really hard to produce the best cabaret we could, but we were able to have fun while doing it, even if we got it wrong,” Grazioso said.

The first act ended with a medley from the musical “Hadestown”, a retelling of the Greek myths of Hades and Persephone and Orpheus and Eurydice. The medley featured Cartelli as Orpheus, Grazioso as Eurydice, Ellis as Persephone, Gilad Gerber as Hades, second student Cameron Martin as Hermes and Rhea Katoch, Sarah Smith and Sarah Pollock as The Fates.

The band have done a fantastic job of guiding audiences through Orpheus and Eurydice’s journey out of Hadestown, and the heartbreaking end to their mythos. Gerber captured the larger-than-life persona and dark voice of the King of Hell with incredible skill. Martin’s performance as Hermes, the series’ narrator, was charismatic and confident.

Cartelli said performing music from “Hadestown” was her favorite part of the cabaret, citing Mitcheson’s excellent directing and the way she worked with the members to develop the characters.

“I loved having the opportunity to perform such a beautiful musical,” Cartelli said. “It was so much fun working with my friends on Rampage and being able to share our passion for acting together.”

After a brief intermission, the second act began with Mitcheson singing “Before the Lights Went Out” by Emilee Petersmark, the lead singer of The Crane Wives, accompanied on guitar by her boyfriend Kyle Crozier, a Suffolk elder and former editor of The Suffolk Journal.

Mitcheson said it was the first time she and Crozier had performed publicly together, despite the fact that they frequently learned and practiced songs together in private.

Smith, a sophomore, performed “I’m Breaking Down” from the musical “Falsettos” for her solo. Sung in the musical by Trina after her husband, Marvin, left her for her boyfriend, Whizzer, the song is a summary of Trina’s feelings about her role in her family. With Smith’s powerful voice and perfect comedic timing, it was impossible to look away from her.

Pollock, a sophomore, sang “Almost Real” from the musical “Bridges of Madison County” for her solo. Her incredible soprano voice spread throughout the hall and captivated the audience throughout the ballad.

After those slower songs, Rampage’s E-Board brought the energy back with their rendition of The Backstreet Boys’ “I Want It That Way,” complete with upside-down hats, flannels, and oversized jeans.

Renata Gaifullina, a senior, sang “Rubia” by HOYO-MiX and Zhou Shen for her very first solo performance as a member of Rampage.

Ellis and Smith concluded the small group performances with a duet of “Dear Theodosia” from the hit musical “Hamilton.” Sung by Alexander Hamilton and Aaron Burr after the birth of their children, the song was a sweet start ahead of the finale.

Fusion Dhamaka also performed a routine on a mashup of songs by Bollywood artists Sundhi Chauhan, Vishal Dadlani and Jasmine Sandlas as well as Doja Cat’s “Woman” before the full Rampage returned to the stage to perform a choreographed medley of ” Edge of Glory”. by Lady Gaga, “Accidentally In Love” by Counting Crows, “Hold Back the River” by James Bay and “Chandelier” by “Moulin Rouge!” Musical comedy.

Confident and coordinated, Rampage brought the house down with his final number, bowing to well-deserved applause. Even if they weren’t the only collegiate show choir in New England, they would undoubtedly be the best.

Venus in Pisces Will Bring Your Zodiac Sign True Love