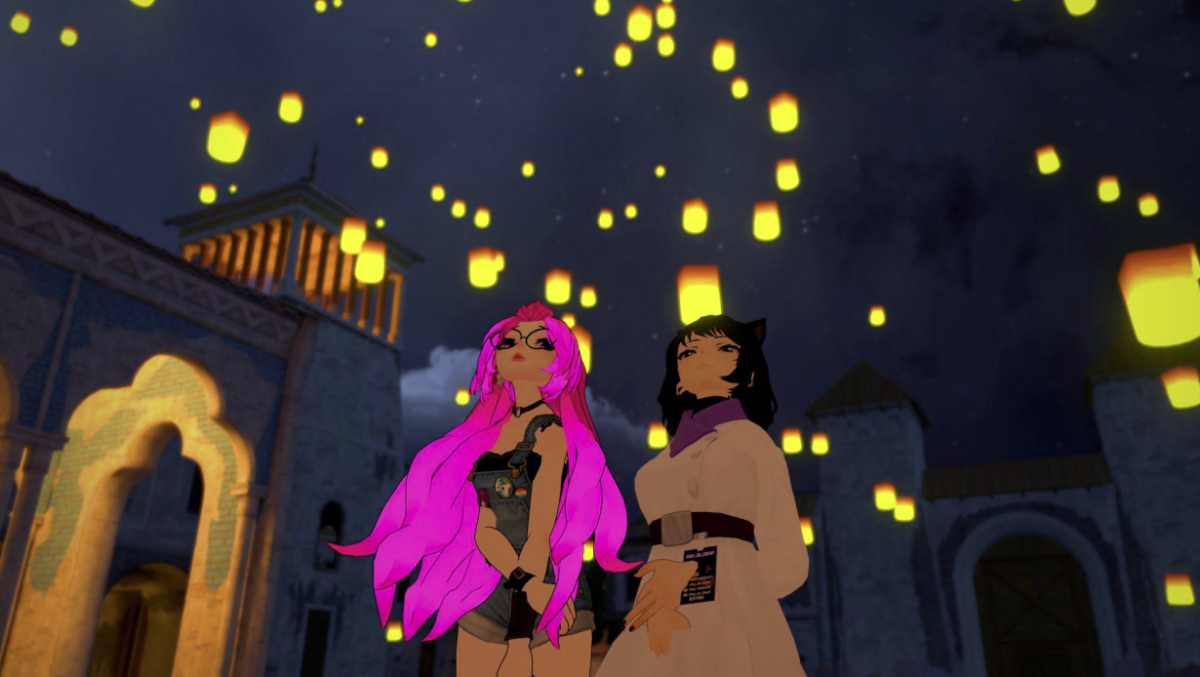 Ever since Facebook changed its name to Meta and announced its intention to bring us all into the Metaverse, its plans for an interconnected digital future have replaced crypto and blockchain as the industry’s go-to futuristic buzzword.

But the metaverse is not yet a distant dream to be realized. For many, the benefits this would bring for online social interaction (from educational courses to dating and finding love) already exist in thriving online VR communities.

At this year’s Sundance Film Festival Documentary Competition, Joe Hunting presents the world premiere of his film We Met in Virtual Reality. The documentary was filmed entirely in VR Chat using Hunting’s Valve Index VR headset and a custom camera called VRC Lens – a third-party program that allowed Hunting to create realistic shots as if of a documentary set in the real world.

In its roughly one hour and thirty minute run time, the film provides a solid overview of what VR Chat and its worlds have to offer. There are maker spaces for the world’s developers to meet and share projects, private spaces for friends to hang out after a busy day at work, fairgrounds for going on a romantic date, and even theaters to present improvisational shows or exotic dances – it offers just as complete a world as we have in ordinary reality.

But the documentary also celebrates the incredible freedom that VR social spaces have to offer. Not only are people free to explore weird and wonderful places, but they’re free to be themselves in a supportive community, and they’re free to fall in love with someone who lives thousands of miles away.

We Met in Virtual Reality features many different users, but it mainly focuses on stories from five topics.

Jenny, the fifth subject of the film, is a volunteer teacher in the Helping Hands community. She works in their American Sign Language school that exists in VR Chat and helps create a supportive environment for all hearing, deaf and hard of hearing VR users.

Through the stories shared by Jenny, DustBunny, Toaster, IsYourBoi, and DragonHeart, Hunting shines a light on the incredibly diverse environment that VR Chat and other metaverses can celebrate.

“It was really important to me to show the progressive nature of space,” Hunting tells me. “Just as the internet was when it was first developed, virtual reality offers incredible new opportunities for people from diverse communities to have their voices heard and share their experiences.

That being said, the way VR Chat exists today isn’t quite perfect. According to Hunting, a more traditional metaverse experience could make it easier to find a community that accepts you for yourself.

“Many people, myself included, who load into VR Chat for the first time face the harassment and issues that the internet generally faces, and it can take a long time for people to find a tribe that accepts them” , explained Joe. .

“It can take a long time to find a community that accepts you because you really have to do that research on Discord or other third-party social apps. A metaverse that combines the benefits of VR chat with the accessibility of something like Discord would be of great help.

Hunting’s comments echo those of Lucas Martell, the creator of Walkabout Mini Golf (one of my favorite Quest 2 games). When he spoke to me earlier in the year, Martell explained that his ideal metaverse would be like Reddit – a social media platform with all these easy-to-find communities and worlds that users could pop in and out of. through a single service.

Beyond better community search tools, Hunting thinks another benefit of more traditional metaverse spaces would be the introduction of integrated e-commerce. Creators can make money from the work they do in VRChat — a common side hustle is creating unique VR avatars for players — but much of it has to be curated off-platform.

If payment systems were built into VR Chat — or whatever metaverse platform you’re in — it might help normalize the idea of ​​paying for VR-exclusive content. Not only avatar outfits that you can try on in-game, but also services that players are currently offering for free, like DustBunny’s belly dancing lessons.

On a more personal note, Hunting admitted that the biggest improvement he would like to see coming to VR has nothing to do with the Metaverse, but his own play space. We Met in Virtual Reality and all my short documentaries is tiny. I could walk maybe four steps before I hit a wall,” Hunting said with a laugh.

A bigger room would help, but more realistically, Hunting would like to see more accessible VR treadmills or “slippery shoes” that allow people to move around in VR without moving around in real life. These add-ons are on the rise, but they’re either too expensive or not supported enough to be worth it.

Despite having genuine and fulfilling relationships entirely online, a common topic of conversation among We Met in Virtual Reality couples is when they might actually meet.

DustBunny and Toaster were lucky enough to meet once, but the Covid-19 pandemic and the travel restrictions it brought meant the two pairs were only stuck online for a while.

Asking Hunting about it, he explained that while the haptics are improving, it’s just not there yet – and even if it was, there’s still something special to be found. in person.

His film tour gave Hunting the opportunity to meet the subjects of his documentary in real life. Enjoying each other’s physical presence adds a dimension that virtual reality and a metaverse cannot match.

But that doesn’t mean metaverse spaces are any less able to fulfill the important roles they have in their communities.

If you’re skeptical about the Metaverse and the future it might bring, I highly recommend checking out We Met in Virtual Reality when you get the chance. Audiences in the UK will be able to watch it on Sky in the not-too-distant future – and we’ve been told it’s coming to the US soon too.