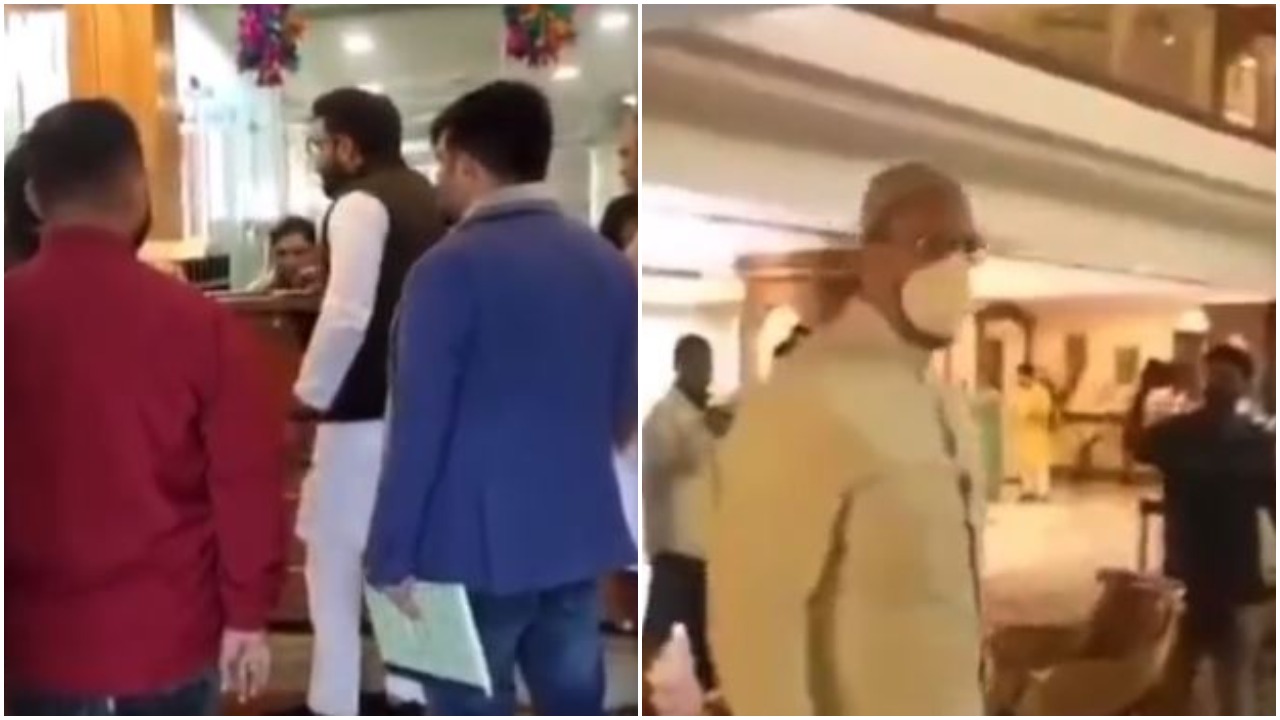 Owaisi was in the city on January 4, 2022 to address a political rally ahead of the Uttar Pradesh assembly elections.

UP hotels refuse to give Owaisi a room thanks to his inflammatory community policy, always threatening Hindus and almost always abusing Yogiji and Modiji. Following.. pic.twitter.com/eLqy1TkdhA

In the 2.20 minute video, AIMIM Uttar Pradesh President Shaukat Ali can be seen exchanging a heated conversation with the person seated at the hotel reception, then leaving the premises with his party members. . Shaukat Ali, who looks visibly angry, speaks on the phone as he leaves the scene. After a while, the head of AIMIM, Asaduddin Owaisi, is seen entering the hotel. He is seen waiting at reception for a while before sitting down in his car and leaving the premises.

The video was circulated with allegations that people like the head of AIMIM were denied rooms in the “Hindu hotel” in Uttar Pradesh because of their anti-Hindu stance. Many media outlets like Lucknow Hindi news shared the video, which was then widely distributed on the microblogging site.

The vernacular media LiveHindustan and ABP News also reported how party members booked the room earlier for AIMIM members, but when Owaisi arrived at the hotel named Drive-In 24 in Moradabad, hotel authorities denied him a room .

What is the truth

The Hindustan report quoted the manager of the Vipul hotel as saying that according to the guidelines, they need pre-approval before they can allocate rooms to political figures. â€œWe operate within the limits of the law. I am ready to give the room once I receive permission, â€said the hotel manager according to the Hindustan report, which was quoted as further saying that the hotel does not believe in any form. of discrimination.

OpIndia spoke with a hotel employee named Arvind Singh Katheria, who claimed to have reviewed the arrangements for the entire AIMIM team, who reportedly stayed at the hotel from January 4-6. He refuted the news that circulated in the media. that Owaisi was refused a room at the hotel. Katheria, on the contrary, confirmed that Asaduddin Owaisi had been assigned a room upon arrival on January 4th and had a very pleasant stay at the hotel and personally thanked the hotel staff before his departure on January 6th. January.

Recounting the sequence of events, Katheria said the Owaisi arrived at the hotel and after checking in he immediately left for a meeting. Some of the people who had accompanied him arrived later that evening.

Disclosing more details, hotel staff said that according to protocols, whenever a VIP guest arrives, the LIU team should be notified in advance so that their safety arrangements can be made.

According to him, if a member of a political party checks into a hotel, a letter must first be issued to the district magistrate’s office, who will then alert the hotel and make the necessary security arrangements for the team. The hotel had not received a letter from the district prosecutor’s office because it had not been forwarded to it beforehand by the AIMIM team.

â€œWe were awaiting a response from the district magistrate’s office when AIMIM State President Shaukat Ali got agitated. He demanded that the rooms be made available to them immediately. We only asked them to wait a bit. Their registration was done even before we received the letter from the district magistrate’s office. Only a few formalities have been left, as it is a matter of safety and we cannot take any risks.

At this point, one of the AIMIM members started to spread rumors that the hotel had refused him a room, which led to the rumor that the head of AIMIM had been refused. a room in the hotel for religious discrimination.

This was a small problem that has been exaggerated and distorted. Shortly after, rumors circulated that Asaduddin Owaisi had been refused a room, which Arvind Singh Katheria said was “totally false and unfounded”.

AIMIM supremo Asaduddin Owaisi, who took the communal route to fight the upcoming state assembly elections, was on a two-day visit to Uttar Pradesh as part of his election campaign. Interestingly, Owaisi had launched his campaign for the 2022 elections in the state of Uttar Pradesh from Ayodhya, claiming that “UP Muslims will win” and since then he has given several inflammatory speeches, inciting Muslims to choose an Islamic leader and not to rely on “Dallas”. other political parties.

Uttar Pradesh police had, on September 9, registered two FIRs against AIMIM chief Asaduddin Owaisi during his public meeting in Barabanki, Uttar Pradesh. The member for Hyderabad had been convicted of trying to disturb community harmony, flouting Covid standards and disrespecting the national flag.

Owaisi, who plans to make forays into Uttar Pradesh by courting the Muslim vote bank, gave a communal speech in which he, despite clarifications from authorities that the mosque was an illegal structure, attempted to provoke Muslims referring to the shaving of a mosque in Ram Snehi Ghat tehsil in May this year.