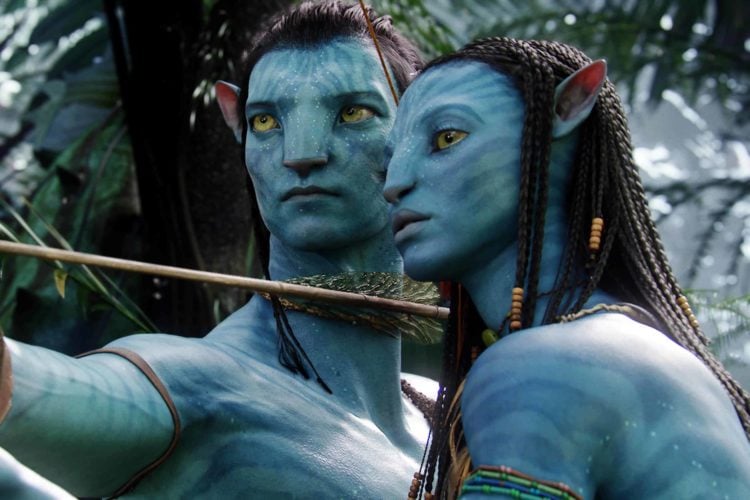 Why Zoe Saldana Was Moved To Tears On Avatar 2

These next few years could be golden years for Zoe Saldana. Towards the end of the year, she will be seen again as the very tall, very blue Na’vi alien Neytiri in the long-awaited sequel to Avatar. Alright, before we go any further, I have to ask, does anyone else feel like this sequel is a few years too late? The first came out in 2009 and James Cameron kept promising us that this sequel would come out sometime after. Oh, and he also promised about three or four more sequels after that one, but if we’re lucky we’ll probably see them all by 2050. Seriously, I’m excited to see Zoe Saldana return to reprise her role . in the upcoming Avatar sequel.

I know it’s cool to call Avatar overrated, but I have to admit, it was one of the best theatrical experiences I’ve ever had. Of course, you can call it Dances with Wolves with Blue Aliens, because it pretty much is. And you know what? Its good. The movie was very entertaining and had a very stacked cast, with Zoe Saldana being one of the few actors you don’t actually see. She plays a blue alien who hunts things with a bow and arrow twice the size of a grown man’s body and leaps over gigantic trees. And on top of all that, his character was the main reason why Jake Sully, the main protagonist, decided to turn his back on humanity and even convert to become a Na’vi.

It sounds bad when I say it like that, but hey, Jake fell in love. This is the Achilles heel of most protagonists. And that’s also why we call Avatar Dances with Wolves with blue aliens. Again, that’s not a bad thing, considering the super epic final battle between the Resource Development Administration’s private security force and all the Na’vi tribes was fun. Honestly, I really want to see how James Cameron tops that in the second. And from what we know about the second movie, James Cameron wanted everyone wet.

You can check it all out on social media, multiple posts of Sam Worthington and Zoe Saldana posing in their motion capture suits. But understand, they were all doing this while they were in the water. You can also see a lot of white balls in the water, which makes me very curious. Let’s keep in mind that a big part of why James Cameron took his time making this sequel is because he claims he needed the right technology to film it. What it’s really referring to is being able to use the right cameras to be able to shoot lots of scenes underwater.

James Cameron will introduce a new Na’vi tribe to the Avatar world of Pandora. They are the clan of reef people known as the Metkayina. From what we know, this tribe will be the Na’vi who live closer to the waters and probably spend a lot of time swimming underwater for whatever reason. I think Jake and Neytiri will find allies in this new tribe when they have to fight the RDA again. And meanwhile, we’ll see all that underwater action. And yes, I think you can expect to see new exotic creatures lurking in the oceans of Pandora.

It will be cool to see and I think Jake will join this new tribe by chasing them or bonding with them. That’s what James Cameron was so adamant about on set, and Zoe Saldana talks about it in a recent interview with journalist Kevin McCarthy. According to her, she was able to see at least twenty minutes of the film and it moved her to tears. It’s quite an emotional reaction and yes, we know Zoe Saldana needs to promote her movie. And make no mistake, Avatar 2 is likely to be one of the biggest movies of the year.

But I think we need to pay more attention to what Zoe Saldana says about this movie. It’s more than just the lead actress promoting her own movie. At the start of her interview, Zoe Saldana explained why James Cameron was so keen on filming the underwater scenes. Now, we all know there will be a lot of CGI in Avatar 2, but one thing that can’t be replaced by any virtual means is water. This is something she pointed out during the interview, as it proves how dedicated James Cameron was to making this film.

Okay, so I could agree that Avatar 2 probably should have come out a few years ago. Heck, we probably should have seen it sooner, but we can’t blame James Cameron for taking his time to move on if he wants to do it the best way he sees fit. Okay, we’ve still been waiting literally over a decade for this sequel and I think a lot of people gave it up a while ago. Let’s put all that aside for a minute and appreciate how understandably emotional Zoe Saldana is to be a part of something that, as she says, will be a big step up from the first. Now that’s really setting the bar high, but I’m willing to give it the benefit of the doubt.

Zoe Saldana used strong words to describe her feelings for Avatar 2. To sum it up, words like “crying” came up, which actually made her suffocate watching the twenty minutes of Avatar 2. If she’s so emotional on Avatar 2, then that should be a good sign. Yeah, she’s supposed to be hyping up her movie, but after hearing her talk about it, I can say it’s way more than just hype. Zoe Saldana was only able to see a glimpse of her work and it looks like she’s very proud of all the hard work the whole team has put in.

There was definitely a lot of money and talent in this sequel, but I’m still waiting for a trailer before I get excited. Still, I’m willing to believe what Zoe Saldana says after hearing her gush about the sequel. She’ll be in many big movies over the next few years, including Guardians of the Galaxy 3 and Star Trek 4, but Avatar 2 will likely top both at the box office. Just wait until you see a trailer and I think it will give us a taste of what Zoe Saldana was getting emotional about. What do you think, James Cameron fans?

CHEEYANG NG is a rising artist at Feinstein’s 54 Below