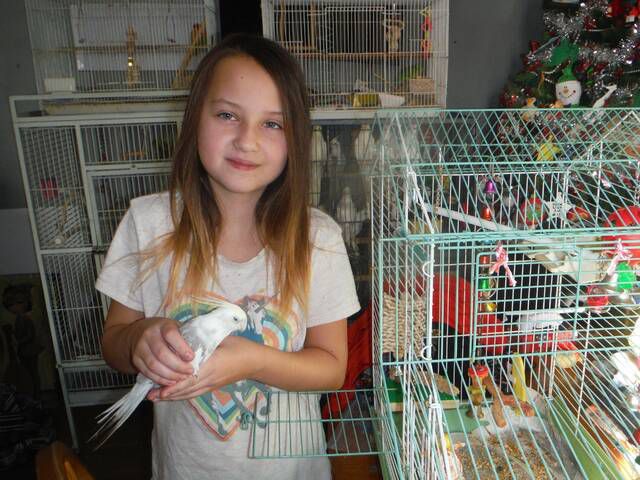 “You have to let them know they can trust you”

Walk into Evlyn Lyons’ house in Plymouth and you’ll likely find the 10-year-old working with a bird, perhaps holding it or letting it rest on her shoulder.

â€œYou have to let them know they can trust you,â€ said Evlyn, who is known among family and friends as well as on Facebook as a â€œbird whispererâ€ with a knack for taming exotic birds.

Being tamed means “they won’t fly away and bite you,” said Evlyn, who recently traveled to the Catskills in New York City to collect around 30 birds that an elderly breeder could no longer care for.

As she quietly worked with one of the new birds, the rest of the flock she raises – there are around 70 birds, ranging from parakeets and cockatiels to a large Amazon parrot – sang, croaks and giggles.

â€œSun-up, they’re like that,â€ said Evlyn’s mother, Linda Uren. “As soon as the sun goes down, we close the curtain and they are silent.”

In the middle of a weekday afternoon, the birds appeared to be a noisy flock. Still, Uren was able to introduce them to a visitor and explain some of their characteristics.

â€œPeggy is a golden sun conure,â€ Uren said, pointing to a bird with striking orange / gold feathers. â€œShe only has one foot. The other got infected and his mother bit him.

Although Peggy doesn’t seem to realize she has a disability, said Uren, a male pet bird named Mango “feeds her, and when she can’t reach her feathers to preen himself, he will do it for her.” .

â€œI love Peggy,â€ Uren said. “But Mango is up for adoption and if he were adopted I would like them to go together.”

Moving on to other birds in other cages, Uren said â€œI must apologize in advance for Floydâ€ pointing to a cockatoo. â€œHe came from a family with teenagers who taught him a lot of curse words. He sings and dances and he curses. He (also) calls everyone ‘Sugar’ and asks if you like him.

Floyd managed to refrain from swearing during the introductions and Uren continued to talk about other birds.

â€œMya is a female eclectus parrot and Merlin is a cockatiel,â€ Uren said, presenting a pair she described as â€œolder and calmâ€.

Although he is silent, â€œMerlin is our escape artist,â€ Uren said. â€œHe can get out of his cage and he figured out how to let everyone out too. “

At over 40, Merlin is considered an ‘elder’ while ‘Mya is middle aged’.

And his crows “sound like the screeching of tires before a car hits something,” Evlyn’s father Brian Lyons said.

Taco is a bilingual speaking bird that can repeat sentences in English and Spanish. “He will ask, Que pasa?” Uren said.

And Mocha, a collared dove, was abandoned by a couple who bought him from a breeder, intending to release him at their wedding.

“But the breeder had cut off his wings, so when they released him he fell,” Uren said. â€œThey didn’t know what to do with him.

So Mocha found refuge with Evlyn, who breeds birds in the name of the My House of Wings animal rescue that Patricia Pipan runs in Nanticoke.

“She just has one talent,” Pipan said in a phone interview, explaining that she was extremely grateful for the help Evlyn provided.

Pipan is also hoping that when Evlyn is older she will lead a local bird rescue.

â€œI was like ‘Oh my god I could pass the torch to her,’ Pipan said.” She loves birds so much. She’s just awesome. She’s been phenomenal – her and her mom and all of her family. world is involved.

“Did you hear how she went to the Catskills to get more birds?” Said Pipan. “By the time she got home, she already had 10 sitting on her shoulders wanting to snuggle up.”

â€œShe’s got the passion, and if you don’t have the passion, you won’t want to do it,â€ Pipan said, explaining that taking care of birds takes a lot of work. â€œThere is very little money coming in, apart from donations,â€ she added.

Already at a young age, Evlyn, who is home-studying at Reach Cyber â€‹â€‹Charter School, had to deal with angry people – people who were upset that she did not approve of their adoption. ‘a bird.

There’s a request to fill out, and Evlyn and her mom verify the information is correct. For example, a potential adopter may say that their owner is OK with the adoption, but in reality the owner does not allow pets.

â€œYou have to educate yourself about a bird to find out if it is right for you,â€ said Pipan, explaining that it wouldn’t be a good idea to surprise someone with a bird’s gift or try to buy one. one simply to match the decor in your kitchen.

Evlyn’s mother discovered her daughter had an affinity for feathered friends when “we went to a pet store, at random, and there were two little girls bumping into a parakeet cage.”

Feeling sorry for the parakeets, “Evlyn cried her eyes out. So we went home with the parakeets, and she wanted more. Then we got in touch with (Pipan) and started cheering.

While Evlyn has cared for the birds for four years, Pipan has dedicated over 30 years to the cause.

â€œWhen my last child went to college, I said, ‘God, which way do you want me to go? Within an hour, a lady from the Weis parking lot approached me with a small cage and a cockatiel and said, “Could you give me $ 5 for this?” “I said ‘Sure, okay’,” recalls Pipan, explaining that she felt called to start taking care of the birds.

She also attributes the help she receives from Evlyn to a gift from above.

Those interested in learning more about bird adoption can contact Patricia Pipan’s My House of Wings at 570-735-4316. Evlyn can be contacted through her Facebook page, EvlynTheBirdWhisperer.

Photojournalist Helane Blumfield picks her 2021 favorites from cabaret and concerts